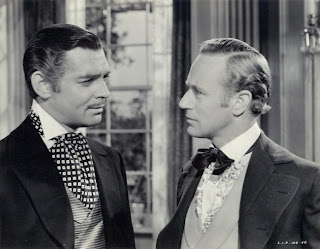 Rhett Butler (Clark Gable) and Ashley Wilkes (Leslie Howard) are the principal men in the lives of Scarlett O'Hara (Vivien Leigh) and Melanie Wilkes (Olivia de Havilland) in "Gone with the Wind" (1939).  Many treatises have been written about the interrelationships between these four characters in both the novel by Margaret Mitchell and the movie produced by David O. Selznick.  What I realized only recently is the fact that, while both Rhett and Ashley each have many significant scenes with Scarlett and Melanie throughout the movie, the two men share screen time with one another in only three scenes:  the scene early on at the barbecue at Twelve Oaks (where the men are all gathered talking about the prospect of war); at Melanie's house right after the shantytown raid (where Rhett has the wounded Ashley pretending to be drunk so as not to be arrested and hung by the Army for helping to instigate the raid); and again at Melanie's house at the end of the film where she is dying.  In fact, I believe there are only two instances where the two men actually exchange words.  During the debate at the Twelve Oaks barbecue concerning the war, Rhett turns to Ashley, when he realizes that his frank discussion about the prospects of Confederate defeat has angered the other guests, and says "Mr. Wilkes, perhaps you won't mind if I walk about and look over your place?  I seem to be spoiling everybody's brandy and cigars and dreams of victory."  Ashley never responds to Rhett's rhetorical exit line.  At the end of the film, as Scarlett expresses disbelief that Melanie is dying, Rhett reminds Scarlett that "She hasn't your strength.  She's never had any strength.  She's never had anything but heart," to which the amazed Ashley responds to Rhett, "You knew that, too?"  And that's pretty much it in terms of the interaction between the two men in Scarlett and Melanie's lives. 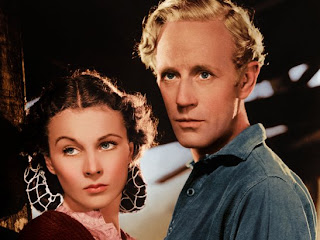 I think the lack of any meaningful interaction between Rhett and Ashley, even though they are long-time rivals for Scarlett, underscores how they have absolutely nothing in common with each other.  Ashley is an ineffectual milquetoast who talks about honor in a quixotic manner, but ultimately proves he has no honor because, aside from fighting in the war, he doesn't stand up for anything he claims to believe in.  He strings Scarlett along for decades, never once having the decency to tell her that he genuinely loves Melanie.  I feel, however inadvertently, he is the one at fault for each of the four principal characters never feeling totally fulfilled with their lives because they are all left wondering if they are with the right partner and whether they should perhaps be with someone else.  Ashley is a wimpy tease of the worse kind, allowing people to care about him, but never having the guts to watch their backs and stand up for them when they truly need him.  His actions leave everybody, especially Scarlett, holding the bag, particularly in the scene where Scarlett has to endure the glares from the other guests at Ashley's birthday party after Scarlett and Ashley were discovered embracing each other at the lumber mill offices by India Wilkes.  It's obvious by the disapproving looks on everybody's face that Ashley never bothered to exonerate Scarlett by explaining that she was simply comforting him after he expressed sentimental nostalgia for the pre-war existence they once knew.  In essence, Ashley threw Scarlett under the bus just to save his own hide.  The ungrateful wimp forgets that it was Scarlett who saved his wife and child when the Yankees were burning Atlanta, who continued to care for them back at Tara, and who helped set him up in business with the lumber mill after the war so that he could provide for his family.  All Ashley can do is look to the past for comfort.  Without Scarlett around to guide him, he surely would not be able to face the challenges of the post-Civil War industrial revolution. 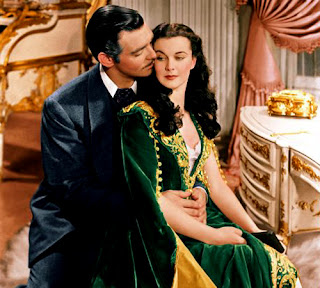 In contrast, as everyone has noted, Rhett is a man of action.  He is a flawed, imperfect person with a rebellious streak who was kicked out of West Point, is not received by any good families in Charleston, and makes his living as a war-profiteering blockade runner.  On the surface, he does not appear to possess the presumed nobility that Ashley is perceived to have, but Rhett proves, through his actions, that he is the man who is truly honorable.  He is the one who pays to retrieve Melanie's wedding ring, after she donated it to help fund the Confederate war effort; has Belle Watling donate gold currency to the Confederate hospital in Atlanta (because he knows Scarlett would never accept the gesture); helps Scarlett escape from Atlanta with Melanie and infant Beau; rescues Ashley and Dr. Meade from a Yankee ambush at the shantytown raid, and provides an alibi for them by taking them to Belle Watling's brothel; allows Scarlett to spend the money to revitalize Tara; and proves to be a good father to their daughter Bonnie.  He might be a hard-drinking, womanizing gambler, but Rhett is a man who is totally pulled-together and who takes care of the people around him.  Unlike Ashley, who doesn't have the guts to reveal his true feelings, Rhett time and time again demonstrates the deepness of his feelings and caring for the people in his life.  He never stops loving Scarlett, even when she continues to disappoint him by loving Ashley, develops strong friendships with Belle Watling, Mammy (Hattie McDaniel) and Melanie, and unabashedly showers his daughter Bonnie with the love and affection that he wishes he could shower on Scarlett, if only she would let him.  (In contrast, we never see Ashley express any genuine caring for his own son Beau, or spend any quality time with him.  Furthermore, the scene where Melanie comes to comfort Rhett after Scarlett's miscarriage is a more insightful moment than the mundane romantic sequence with Ashley and Melanie at the Twelve Oaks barbecue, one of the few scenes the Wilkes's have alone with each another.  In Rhett's presence, Melanie becomes earthier, more self-aware, and more candid discussing the circumstances of all of their lives than we would have expected from her.)  Because Rhett is someone who is willing to put himself and his heart on the line, it must irk him to stand in the same room with the passive and ineffectual Ashley, who remains disconnected from the people and environment around him. 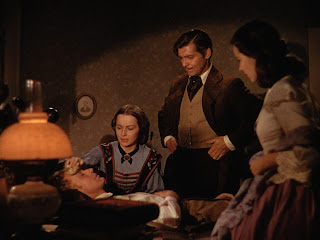 That's why I think we never really have a scene in "Gone with the Wind" with Rhett and Ashley having any meaningful interaction with each other.  The two men have nothing to say to each other, and nothing in common in terms of interests (other than Scarlett) or in temperament.  Even without the connection to Scarlett, it is doubtful that the two of them would ever be friends with one another other.  Rhett has the courage and vision to look towards the future and pave a way for himself and his loved ones in post-Civil War Atlanta, while Ashley is helplessly living in the past, riding on Scarlett's coattails for survival.  It might have been interesting if the two of them finally duked it out with one another over Scarlett, but I don't think Rhett would ever waste his time on a wuss like Ashley. 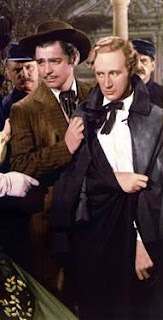 Similar to their characters, Clark Gable's vivid performance as Rhett still resonates with us 73 years later.  Despite his admitted reluctance to play the role, Gable's professionalism overcomes any qualms he may have had about the project.  As everybody back in the 1930s felt, he proved to be the quintessential actor to play Rhett, able to balance both his flaws and strengths into creating a completely 3-dimensional character who continues to win our respect and admiration decades later.  Particularly in the scenes late in the film with daughter Bonnie, Gable proves to be just as courageous as his character in allowing himself to explore Rhett's vulnerabilities on-screen.  He should have won the Best Actor Oscar that year for his touching performance.  Similarly, Leslie Howard (whose disdain and contempt for "Gone with the Wind" has been well-noted through the years and which shows in his lackluster performance) brings absolutely no depth to the role of Ashley.  His lazy performance ensures that Ashley is a shadow of a personality throughout the film.  Ashley is the one character, from the quintet of principal leads in "Gone with the Wind," who never truly wins over the heart or enthusiasm of the audience.  Howard's condescension to the material, and his cowardly inability to find any sort of depth or humanity to the character, ensures that he remains inaccessible to audiences.  The decency that the other characters attribute to Ashley never comes through.  We don't like Ashley and he is, at best, tolerable to watch.  That's OK, because it allows our sympathies to remain with Rhett--where they belong.  Whether intentional or not, the qualities that both men brought to their roles only serves to underscore the generally accepted belief that David O. Selznick did indeed pick the perfect cast for "Gone with the Wind."
Copyright and Posted by Hill Place at 6:43 PM