Anita Ekberg Comes Back From Eternity 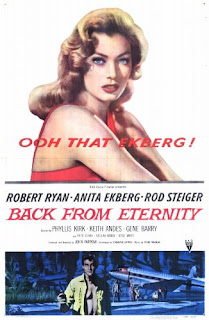 One of my favorite movies to watch whenever it airs on TCM is RKO's disaster melodrama "Back from Eternity" (1956), director John Farrow's remake of his own 1939 drama "Five Came Back."  In both films, a planeload of tourists are stranded in a South American jungle after a plane crash, unaware that they are slowly being stalked by ever-approaching headhunters.  Even though the original "Five Came Back" is generally considered the better film, I admit I prefer "Back from Eternity" because of the presence of the amazing blonde Swedish bombshell Anita Ekberg.  Ekberg plays Rena, a cynical, hard-bitten prostitute who has lost her job working a Vegas casino and, to avoid deportation because she has no citizenship status in the States, was on her way to her next assignment to work for another casino/brothel in South America when the plane crashed.  (Lucille Ball played this role in the original "Five Came Back.")  In the course of the story, Rena goes from being a sullen, self-centered woman to someone who contributes to the care and well-being of her fellow passengers, sharing equally in the chores and eventually developing a maternal concern for Tommy, the orphaned little boy on the flight played by Jon Provost.  When the survivors discover that the headhunting natives are about to close in on them, they realize that the only fully operational engine left on the plane has enough power to fly only five survivors back to civilization.  Who, amongst this motley group, will be allowed to board the plane to come back from eternity? 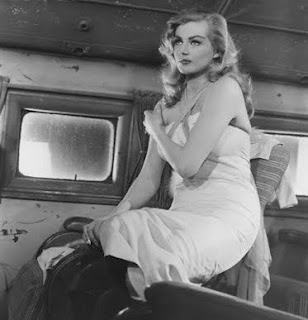 Throughout the movie, Ekberg and director Farrow defy audiences expectations of Rena by choosing to demonstrate her good qualities.  Since this movie was made in the cynical, post-war film noir era, it would not have been out of the question for Rena to have turned out to be irredeemable.  Because of the changing moral climate brought on by the passage of 17 years, director Farrow could have changed the character arc that the prostitute Lucille Ball played in "Five Came Back" (named Peggy Nolan in that film) experienced when he remade this film, but he chooses not to.  Instead, he honors the character and makes her even more endearing by casting a seemingly unlikely actress to play the role in the remake.  On her own terms, Ekberg makes Rena a sympathetic and surprisingly touching character.  She develops a friendship and emotional bond with the plane's captain, played by Robert Ryan, that goes beyond their initial attraction to each other.  Ryan's character becomes so impressed with Rena's change-of-character that he offers her the property he owns, and the money he has saved, so that she can raise the little boy in a secure environment in case they are able to survive their crisis in the jungle.  The other passengers on the plane start out wary of Rena--her glamorous attire and slinky demeanor make it obvious to them what she does for a living--but they eventually come around once they recognize her underlying decency.  In fact, Beulah Bondi and Cameron Prud'Homme's elderly married couple come to see Rena as almost a surrogate daughter figure.  The screenwriters introduce a judgmental adversary for Rena in the prim and proper Louise Melhorn (Phyllis Kirk) character, who disapproves of Ekberg's Rena becoming a mother figure for the little boy Tommy.  (Wendy Barrie's Alice Melbourne, the corresponding character to Louise Melhorn in the original "Five Came Back" was nowhere as condescending or disapproving of Lucille Ball's Peggy.)  When Rena teases Louise about her attraction to handsome co-pilot Joe Brooks (Keith Andes), the seemingly civil Louise starts a cat-fight that lands both women in a pond.  (I'm sure director Farrow enjoyed staging it!)  When Joe comes upon the scene, the ever-conscientious Rena quickly devises a cover-story that Louise accidentally fell into the water, so that her adversary can save face.  Rena might appear cold and tough on the surface, but her vulnerability and humanity can't help but shine through. In addition to being based upon the original character that Lucille Ball played in "Five Came Back," Rena is also reminiscent of Claire Trevor's prostitute Dallas from John Ford's classic "Stagecoach" (1939), another social outcast whose virtues the audience recognizes sooner than some of the other characters in the film.  Ekberg is nowhere the actress that Trevor (or Ball) was, and Rena is nowhere as well-written or nuanced a character as was Dallas, but the Swede does well on her own terms.  I admit, in the interests of full-disclosure, that I've always liked Ekberg.  If she did nothing other than "La Dolce Vita" (1960), she would be ensured a well-earned place in cinema history, but she's enjoyable in many other films such as this one.  Ekberg correctly downplays some of her traditional glamor in the latter parts of the movie where Rena shares equally in the communal chores.  She's still gorgeous, but lets herself get mussed enough so that she doesn't seem as unrealistically coiffed amidst tropical conditions as Ginger Grant.  She and Robert Ryan make a likeable couple, and the scenes where she befriends little Jon Provost are surprisingly touching.  Ekberg may not be a great actress, but she brings enough heart and humility to the role to be able to sell the notion that this selfish woman has suddenly become selfless enough that she is willing to sacrifice her life to allow little Tommy to survive.  Because of what we have already seen of her in other roles, it is not at all surprising when Lucille Ball in the original "Five Came Back" ends up becoming a maternal figure.  Ekberg playing these emotions seems less likely.  The fact that she is able to pull off Rena's character change makes her more touching than Ball was in the original. If anything, Ekberg is even more vulnerable than Ball was.  In the scene in the original, when Ball's character volunteers to be one of the people left behind (so that little Tommy can board the plane), she cynically says "I'll stay too.  I'm pretty fed up with things outside.  I don't care much what happens."  In the same scene in the remake, Ekberg simply looks down sadly at Tommy and declares "I'll stay."  Rena has changed so much in the jungle that she doesn't have anymore of the world-weary skepticism that Ball's character somehow retained under similar circumstances. 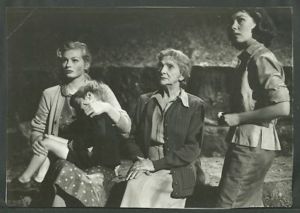 (Spoiler Alert!)  Director John Farrow should be commended for avoiding the cliche of punishing the previously sinful Rena for her past transgressions in her prior life.  It was easier for him to allow Lucille Ball to survive in the original film because that film only implied what she is, without actually showing it to you.  Farrow changes the introduction to the character in the remake by opening the film showing Rena working the casinos in Vegas, and being slapped around by her employer.  (You can see that scene here.)  In this instance, there is no avoiding the tawdry nature of what she does for a living--it's smack dab in your face.  Nevertheless, he allows Rena to enjoy a full redemption by including her among the quintet of survivors who fly out of the jungle to a new life filled with promise and hope.  Ekberg must've taken that to heart because, within a few years of this film, she was off to Italy and Fellini and never returned to the United States.  As such, "Back From Eternity" ranks as one of Ekberg's few decent shots at Hollywood stardom.  Her good performance in this film should have warranted better Hollywood offers than the ones she subsequently received.  If the movie has any significance at all in 2012, it is that Anita Ekberg would rarely again be allowed an opportunity to try and create a nuanced character in an American film as she does here.
Copyright and Posted by Hill Place at 7:53 PM