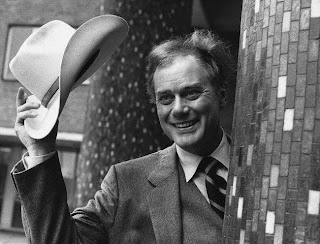 In law school, my classmates used to say that they learned their values from growing up watching "Star Wars," while I got mine from growing up watching "Dallas."  Even though it's not as sinister as it sounds, it's true.  As I've written about before, "Dallas" was really about family and respecting one's legacy (values that I certainly believe in) and no one projected that aspect of the show better than Larry Hagman as JR Ewing.  As villainous as he was playing JR, he played a villain the audience could identify with.  He was motivated to be as ruthless as he was in order to fulfill what he thought were the expectations of his father, Jock.  Even though he cheated in business, and cheated on his wife, there was a humane side to JR.  He loved his mama Miss Ellie and daddy Jock and his brother Bobby, and his son John Ross.  And he even, at times, remembered that he loved Sue Ellen.  He wasn't just a villain for the sake of being evil.  He did what he did in order to ensure that Southfork and Ewing Oil would continue to thrive for decades to come (under his control, of course). 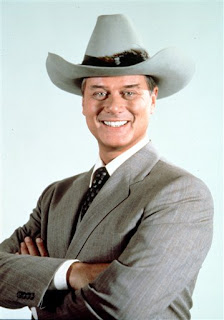 Hagman was effective in portraying these aspects of JR because, from what I always heard and read about him, he was himself a very loyal and lovable guy who always looked out for his colleagues on "Dallas."  I have read interview-after-interview with "Dallas" supporting actors who always said that it was Hagman who helped ensure that their characters (and, in essence, their jobs) would last longer than it might normally have lasted had it been solely up to the producers of the show.  He also made sure that people who worked both in front of the cameras, and behind the scenes, got their raises so that their contributions to the series were recognized in a significant manner.  He appeared to recognize that "Dallas" was not just about JR--it was about the entire Ewing family and the extended characters that made up the city of Dallas that made the show successful. 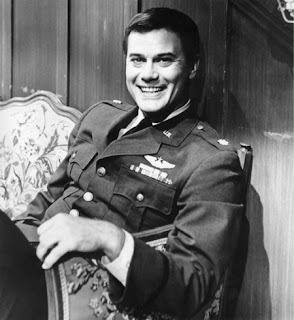 People thought Hagman was playing himself when he played JR, but I don't agree.  He was a superb actor who was capable of playing serious drama (see his portrayal of Joanna Pettet's abusive and self-pitying husband in Sidney Lumet's "The Group") as well as comedy (he wasn't afraid to make a fool of himself week-after-week in "I Dream of Jeannie" back in the 1960s).  At the same time, Hagman had an ability to tap into the dark side of JR Ewing that could be truly chilling.  One of the most brilliantly acted moments in "Dallas" history is the scene when JR calls Holly Harwood (Lois Chiles) to Ewing Oil offices late at night.  You can see it on YouTube here.  He is furious at her for having called the Air Force when JR refused to allow Holly to honor some of Harwood Oil's military contracts.  As he reminds her, no one was ever supposed to know that he was secretly running Harwood Oil.  To prove his point that he controls both Holly and her company, JR forces himself sexually upon the vulnerable Holly.  It is an act that JR would suffer serious repercussions from later on in the season.  The brilliance of the scene comes from the subtle manner in which Hagman and Chiles play off one another.  Rather than overt hysterics, both actors make wise choices and play the scene with a chilling calmness that belies what's at stake here--Holly's sexual and professional freedom.  Hagman also had a satirical quality that was used to good effect in such 1970s movies as "Mother, Jugs and Speed" (1976), "The Big Bus" (1976), and "The Eagle Has Landed" (1977).  I also remember him for his tongue-in-cheek BVD underwear ads in the 1980s.  He had this expression on his face in those ads which seemed to say "You might think I'm silly to be doing these ads, but I'm the one who's laughing all the way to the bank!" 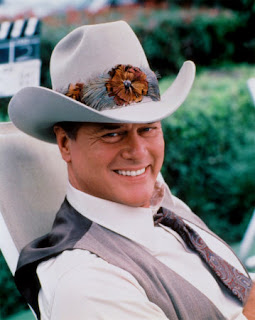 But there's a heartfelt side to Hagman's acting that rarely gets enough praise.  Throughout the run of "Dallas," there were storylines where Hagman had the confidence to allow JR's vulnerable side to show.  In the show's first season, JR learns that his trusted secretary and mistress Julie Grey (Tina Louise), a character that he sincerely loved, but took for granted, has betrayed him by having an affair with Cliff Barnes and given over Ewing Oil secrets.  After Julie's affair and betrayal has been exposed, he confronts her at her desk as she is packing and resigning from her job.  You can see it at 1:41 here.  In one of the rare moments in "Dallas," history, JR drops his bravado and appears truly hurt to learn that a woman he cared about betrayed his trust.  JR's shell-shocked interrogation of Julie by asking her "Do you love him (Cliff Barnes)?" and her sardonic/ironic deadpan reply "I don't love anybody" speaks to the depth of the hurt feelings between these two characters.  As with the aforementioned scene with Holly Harwood, Hagman and Louise make smart, unexpectedly subtle choices in playing this scene that help make the underlying emotions resonant even more deeply.

In the show's final season, JR had a ridiculous storyline where he intentionally commits himself into an asylum in order to try to get one of the inmates to sign a document so that he can gain control of, I believe, Westar Oil.  He accidentally finds himself committed against his will and subjected to lobotomizing treatments.  JR is befriended by a rag-tag group of mental patients with whom he becomes very close.  At the end of the day, it is his fellow inmates who come to JR's rescue.  As JR leaves the asylum, he has a poignant scene where he comes back and gives each of them gifts.  For the one mental patient who he became closest to (the touching Zane Lasky as the hapless Donia), JR promises to give him a job in Ewing Oil once he is released (the poor soul lost his job, his marriage, and his home and, as a result, had a nervous breakdown) and vows to take care of him the rest of his life.  It could have been a corny moment, but Hagman really sells the scene so that JR's sincerity comes through. 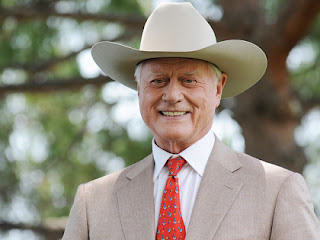 I will also never forget the episode where Jock Ewing's plane crashed into a South American swamp.  The episode, which had JR, Bobby, and Ray, traveling to South America to find him was gut-wrenching.  Having recently lost my own father to lung cancer, I now identify completely with the sense of grief and loss that their characters faced when they realized that Jock had died in the crash.  The moment that stays with me forever is the scene when the boys come home to face Miss Ellie and tell her what happened.  You can see it here.  JR is so overcome with emotion that he can't even face his own mother.  He goes out to the back patio at Southfork, looks at the medallion necklace his father used to wear, smiles to himself (perhaps remembering all the good times he spent with his father), and looks out towards the darkened sky above.  It's a wordless moment, but the emotions Hagman evokes from it speaks volumes. 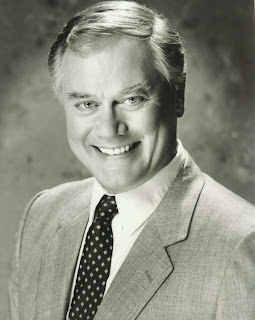 I met Hagman a few times over a decade ago when he used to attend social functions at a museum in Los Angeles I used to work at.  He attended with his wife Maj and would graciously answer questions I would pose to him about the many actresses he worked with through the years.  I will never forget how Hagman said he never criticizes other actors, because he thinks the tendency to dish about your colleagues is very hurtful, and that he always tries to find the good in people.  I think Hagman's ability to find the humanity even in treacherous JR Ewing is the reason why the character resonated so deeply with viewers around the world and remains fascinating to this day.  What I find so poignant about Larry Hagman's death is that he was a native Texan who passed away in his home state while still playing JR on the new "Dallas," surrounded by people like Linda Gray and Patrick Duffy.  You hear too many stories about people who pass away alone and isolated, that it's good to know that he was in his natural environment, doing what he loved most, and surrounded by the people closest to him.  He died with his boots on.
Copyright and Posted by Hill Place at 9:43 PM