(Hopefully) Suggestions of a Feud Have Been Greatly Exaggerated by "The Rest" of Us... 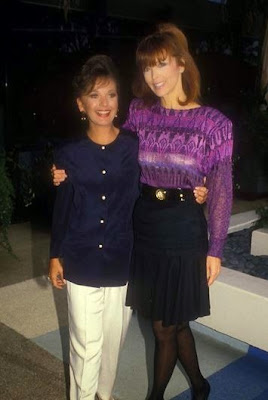 Last night, Caprice Crane, the daughter of Tina Louise (and a witty racounteur in her own right on her Twitter feed @capricecrane), emailed me that her mother had started an official Facebook page and encouraged me to share it with others.  I Tweeted it last night and you can find it at this link.  This morning, I noticed a heartening and touching exchange between Dawn Wells and Tina Louise on the page that hopefully dispels and undercuts any suggestion of a feud brewing between the ladies.  See the screen capture below: 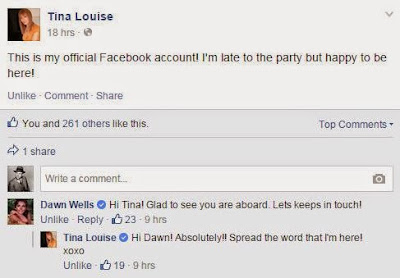 I've already blogged in the past about my thoughts on the whole Ginger vs. Mary Ann debate.  To my surprise, it's been one of my most controversial (for lack of a better word) pieces.  It has evoked some genuinely passionate responses from defenders of both Dawn Wells and Tina Louise.  In my personal opinion, I get the impression that neither Wells nor Louise is interested in having any sort bad blood brewing between them, and would prefer to focus on the positive aspects of their association with "Gilligan's Island."  Sometimes, despite all the gossip you hear, I think all this talk about a feud has been at least partially fueled and perpetuated by "the rest" (pun intended) of us passionate fans who have taken a strong stance in the on-going "Ginger vs. Mary Ann" debate.  As a fan of "Gilligan's Island" who hates the Ginger vs. Mary Ann debate (because I think they're both great, just in different ways), I look forward to seeing what Tina Louise shares on her Facebook page and, even more importantly, look forward to seeing further exchanges online between Louise and Dawn Wells.
Copyright and Posted by Hill Place at 7:08 AM 2 comments: