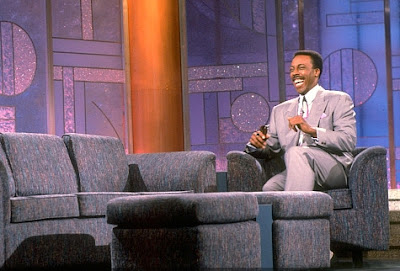 A few months ago, a married couple who are good friends invited me over for dinner with their family.  We had a great time laughing and socializing and they both told me that they enjoyed having me over because I let them relax and just be themselves.  I thought that that was one of the greatest compliments that a person could receive--that somehow you were able to put people at ease that they didn't need to put on any airs and they could express themselves naturally.  Which brings me to Arsenio Hall.  I am very happy to see Arsenio Hall return to the late-night arena this coming Monday night with the revival of his 1989-1994 syndicated "The Arsenio Hall Show."  I have good memories of Hall and his show because he was part of my regular TV viewing during high school and college.  What I liked about Hall was the warmth and good humor that he brought to hosting a late night talk show.  There was never any cruel, self-satisfied, post-modern snarkiness from Hall that I see from too many late night talk show hosts these days.  He just seemed like the kind of regular guy that you wanted to have as your friend and who always seemed to bring joy to any situation. 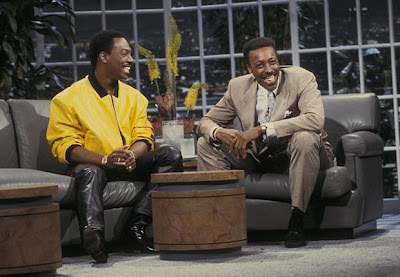 I first became aware of Arsenio Hall when he became one of a series of temporary hosts that the newly launched Fox Network had hired to replace original host Joan Rivers on "The Late Show" after they had fired her back in 1988.  He was funny and irreverent and kept me in stitches.  I recall how Hall, as far back as "The Late Show," dispensed with interviewing people from behind a desk and set up an easy chair in its place so that he and his interviewees could be more at ease with one another.  I still remember the time he had Eddie Murphy on as a surprise guest on "The Late Show," probably the most exciting episode of that short-lived talk show.  I was always disappointed everytime I tuned into "The Late Show" and found one of the other alternate hosts were on that night instead of Hall.  As such, I was very excited when I heard later in 1988 how Paramount had signed a deal with Hall for him to host his own self-titled talk show starting in January 1989.  I was fully prepared to welcome him into my home when his show debuted.  He had great guests, great music, and always asked great questions. 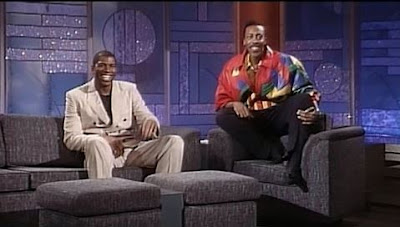 What I liked about Hall was how he let his guests be themselves, allowed them to shine and talk about what they wanted, and never tried to impose his own subjective viewpoint on them.  Occasionally, he could pull a joke on them, but it was never cruel and was always funny.  I recall the time he had Kirstie Alley on his show and screened a clip from an unsold 1983 NBC TV pilot called "Highway Honeys" that she did early in her career.  Alley laughed good naturedly as Hall dredged up this skeleton from her past and didn't seem angry or annoyed at his cheeky display of humor.  Rather, showing the clip appeared to help Alley put into context how far she had come in her career so that it was a positive look at her past, rather than something embarrassing.  I'll also never forget the night Arsenio Hall surprised Eddie Murphy on his show with an appearance by Michael Jackson, who was there to present an MTV Viewer's Choice Award to Murphy for his brilliant career in comedy.  If there were surprises on Arsenio Hall's show, it was always to enhance the people who were on, rather than the other way around (as it too often is on talk shows these days.) 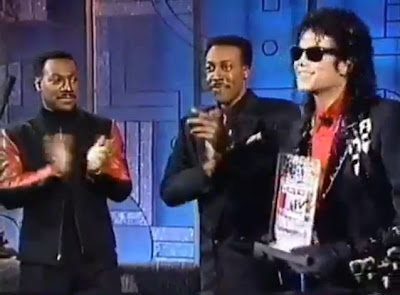 The thing about Hall that I always remember is what a good listener he was to all of his guests.  It always appeared to me that he was excited to be in that job and he really wanted to get to know who his guests were.  As such, he allowed them room to discuss the things that were on their mind.  This quality was evident in Hall even back when he hosted "The Late Show" on FOX before he got his own show.  I recall one instance when actress Margaret Ladd, who played Emma on "Falcon Crest," was making a guest appearance on "The Late Show."  After Hall introduced Ladd, and described her character on her series as "the mentally deranged Emma Channing," Ladd diplomatically disagreed with that description of Emma and took the time to describe how Emma was a much more nuanced character than that.  Hall never seemed annoyed with how Ladd was correcting his description of her character and allowed her room to express herself.  You'd never see that with Letterman or even Leno, who probably wouldn't have even allowed Ladd to get in a word edgewise. 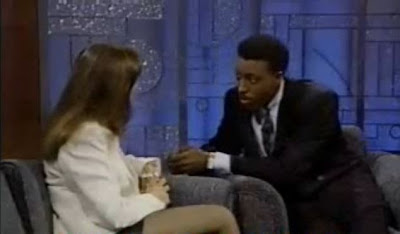 One of my favorite segments on the original "Arsenio Hall Show" was when Margaret Ladd's colleague from "Falcon Crest," Ana Alicia, appeared on the May 16, 1989 segment in order to discuss her return to "Falcon Crest" after the new producers in Season 8 had decided to kill off her character, Melissa Agretti.  You can see the interview on YouTube here.  I really appreciated the way Hall acknowledged what had happened to Ana Alicia--and also acknowledged the frustrations of fans like myself who hated the creative decisions the new producers made that season--when he said "Well, obviously they (the new producers) don't know what they're doing because you make decisions for demographics and the fans didn't agree at all with what they did."  It was good to have someone prominent in the media underscore the importance of Ana Alicia's contribution to "Falcon Crest," as well as validate the feelings of frustrated fans like myself.  But, more importantly, Hall gave us a good interview with Ana Alicia that night where he was respectful, yet playful, and the two had genuine rapport and chemistry playing off of one another that you just can't manufacture. 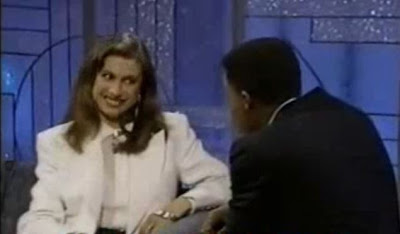 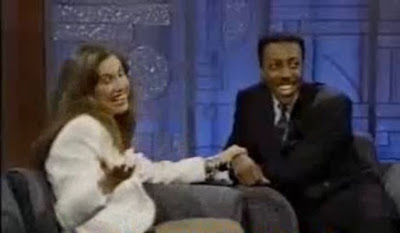 At one point in the interview, Ana Alicia good-naturedly ribs Arsenio Hall for having asked her friend and "Falcon Crest" colleague Lorenzo Lamas, when he was on the show two months earlier, about Apollonia while Lamas was discussing his working relationship with Ana Alicia.  Hall becomes sincerely bashful, assures her that he has seen her work on "Falcon Crest" and knows who she is, but explains that "You know, I guess I just had this thing for Apollonia, you know, since she was a Rams cheerleader, you know, even before she was into television."  When Ana Alicia reassures Hall she isn't offended, he suddenly interjects "Have you ever seen (Apollonia's) nude scene in 'Purple Rain'?...You know what I mean?  Once you take off some leather on 'Falcon Crest' and jump in the water, I'll be asking about you all over town!"  I remember how Hall's comedic timing at that moment brought down the house.  But what made the moment work was the fact that Hall remained respectful of Ana Alicia's dignity even while playfully bantering with her.  Hall was laughing along with her throughout this segment, which is why it came off so endearing, charming and funny. 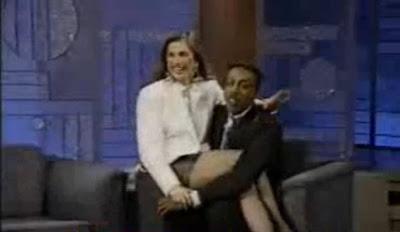 Later in the interview, when Hall asks Ana Alicia if she's married, without missing a beat, she responds with "No, are you asking?" to which Hall playfully retorts "If that skirt goes up any higher, I might!"  Moments later in the interview, Ana Alicia asks Hall if he's ever conducted an interview with a guest sitting on his lap, leading him to invite her to sit on his lap, which causes the audience to go wild.  Ana Alicia jokes, "This is really intimate here" to which Hall responds "Johnny would never give you this, baby!"  When Ana Alicia gets up and sits back down on the couch, Hall playfully exclaims "I was fine!" and sits on her lap for the remainder of the segment.  Even though they are being playful and flirtatious with one another, it never becomes undignified because Hall's respect for Ana Alicia as an individual still registers strongly.  Both individuals know just how far to take the playful bantering without ever going over the line.  She even gets an opportunity during this part of the interview to discuss her new movie "Romero" (1989) with Raul Julia in a substantive and sincere manner.  As Ana Alicia describes the movie to Hall, she jokes "I feel like I'm telling a good-night story!" before the segment wraps up with Ana Alicia and Arsenio Hall giving one another a heartfelt and sincere hug.  I remember seeing this segment when it first aired and laughing all the way through it because Hall touched upon all of the subjects I wanted to hear about--Ana Alicia's return to "Falcon Crest" and her new movie "Romero"--as well as the fact that it allowed the viewer an opportunity to get to know who these two people are as individuals.  (Hall and Ana Alicia have such great chemistry together, it's too bad the two of them have not worked together in a scripted comedy movie or TV show.)  I felt at the time, and still feel now, that this was the perfect example of how an interview segment on a late-night talk show should be--funny, energetic, and full of good humor and warmth. 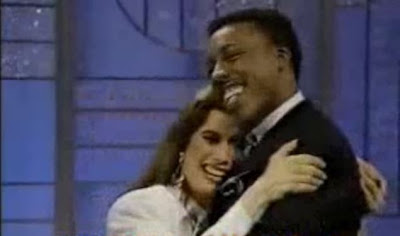 Over two decades later, Arsenio Hall's innate kindness and respect still leaves a lasting and vivid impression on guests from his original show like Ana Alicia.  She recently recalled how "I was blessed to have been on Arsenio's show twice, and I found him to be a real gem of a human being.  He was as kind and funny off the show as he was on, which is unusual in the talk show circuit.  He was always supportive and, from my experience, had a great deal of respect for women, which I--as a young actress--truly appreciated.  I wish him the greatest success in his comeback, and I will be watching and rooting him on."  She's not the only one who wishes Arsenio Hall well.  There are many so-called "Generation X-ers," now in our early 40s, who have fond memories of watching Hall in our dorm rooms after a long day of classes and studying.  He was a good role model for young people in the early 1990s and set a good example of how hard work, talent, and kindness is always preferable to cruelty, sarcasm, and snarkiness (which characterizes too much of the media these days).  I also wish him all the best and expect to see him around for years to come.  Welcome back, Arsenio Hall.
Copyright and Posted by Hill Place at 6:10 PM No comments: