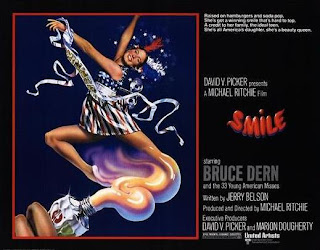 Michael Ritchie's beauty contest satire "Smile" (1975) was one of the most underrated and funniest films of the 1970s.  It told the story of one-week in the lives of various participants of a state-wide beauty pageant taking place in Santa Rosa, California.  Overlooked at the time of its release (it was probably eclipsed by the similarly-themed and structured "Nashville," which came out a few months before), its reputation among serious film aficionados has justifiably grown through the years.  It's one of my favorite films and I have read many reviews and articles written about the film.  Many of the treatises that discuss "Smile" usually mention Bruce Dern as the pageant's overly optimistic Chief Judge; Barbara Feldon as the former beauty queen-turned-pageant coordinator; Michael Kidd as the cynical, yet humane, veteran choreographer staging the pageant; Annette O'Toole as the shrewd, yet vulnerable, veteran beauty pageant contestant; Maria O'Brien as the manipulative Mexican-American contestant; and Colleen Camp and Melanie Griffith as two other nubile, yet vengeful participants. 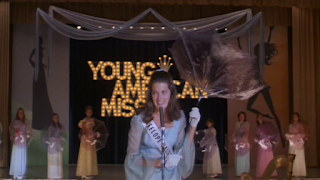 Strangely overlooked in most serious discussions of the film is Joan Prather's beautifully realized and delicate performance as Young American Miss pageant contestant Robin Gibson from Antelope Valley, California.  Hers is the sort of performance you scratch your head at wondering why it did not catapult her to greater acclaim and stardom.  Jerry Belson's skillful script makes Robin the central protagonist in the overall film (sorry, Bruce Dern), the one character that we the audience can truly identify with in a gallery of eccentrics.  Robin is an admirable person from any objective viewpoint: raised by a single mother (her father died when she was little), she is a straight-A high school student who is a talented flutist and who got involved with the pageant, evidently, for the scholarship money.  She's naive as to the competitive nature of the pageant, but she soon wises up once she gets a whiff at potential victory.  The dilemma Robin faces in terms of how far she must submerge her genuineness in order to put up an idealized facade for the judges is truly compelling.  Robin's interview with the judges is one of my all-time favorite scenes in the history of cinema.  When asked if it was difficult for Robin to maintain her 4.0 grade point average during her Senior Year of High School while working a part-time job at JC Penny's, the unassuming girl simply responds "Of course!" which evokes a silent reaction of unease from the judges who had, based on the interviews with her competitors, come to expect a flowery and elaborate response to that question from her.  (You can see that scene here.)  Later in the interview, while being interrogated about her musical ability, Robin finds herself forced to provide the sort of stock answer ("I think my music is one of the best ways I can help others!") the judges expect from her in an effort to avoid alienating them.  In the end, however, Robin's healthy skepticism of the pageant helps to ensure that she won't lose her identity or her ethics in the course of trying to win. 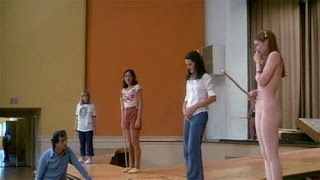 What I liked about her character was her ability to take a step back occasionally and assess the madness of the situation without ever seeming condescending or superior about the other characters or of the pageant.  It's as if she has acknowledged to herself "Who am I to judge this when I'm a willing participant in it?"  Robin is that "smart" character who never gets on our nerves or loses our sympathy because, while she has compassion for everyone around her, she is still human enough to have to try and restrain from giggling when Maria O'Brien's contestant has her talent act ruined due to Colleen Camp and Melanie Griffith's sabotage.  Even though she is more self-aware, she is imperfect and flawed like the other characters in "Smile," and that's why we like her. 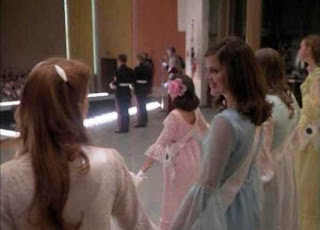 Some of the best moments in "Smile" are the scenes depicting the evolving friendship between Robin and her roommate, Annette O'Toole's Doria Houston.  They are great together and it's a shame that Prather and O'Toole have never worked together in anything else.  I have always found it touching how O'Toole's Doria starts off as seemingly self-possessed, until her insecurities start to show when she does not win any prizes on the first night.  Naive Robin ends up being the stronger person as the seemingly assured Doria eventually drops her facade and shows how vulnerable she really is.  An absolutely great sequence is one where director Ritchie stages the presentation of preliminary winners from the first night of the contest, with the Beach Boys's "California Girls" underscoring the scene.  Ritchie cuts back and forth between both girls as Doria becomes more and more anxious and desperate when she sees the other girls being chosen instead of her.  Robin is so concerned for the mental and emotional well-being of her new friend that she is too preoccupied to notice when her own name is announced as the winner of "Vim and Vigor" (whatever that's supposed to be) and wins a silver platter in the process.  As the curtains close, rather than savor her own victory, Robin runs to find the weeping Doria and puts her arms around her roommate/friend to give her a comforting hug.  Because they started out as wary yet friendly competitors, it's one of the most touching moments I've ever seen in a movie.  Later, at the end of the pageant, when Doria wins 4th runner-up and Robin ends up being the one left empty-handed, it is Doria who tries to comfort Robin by saying "I wanted you to win, too....Maybe I'm not an opportunist."  But ever sensible Robin responds, "Hey Doria don't worry about it!  I'm just glad it's over."  Prather and O'Toole have such great rapport that you hope that their characters will remain lifelong friends long after the pageant has faded into background. 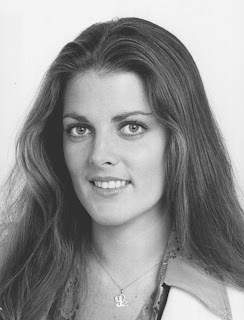 "Smile" represents the greatest role Joan Prather ever enjoyed in her career.  It should have led to other roles in major movies.  Nevertheless, she was very prolific in both films and television from the mid-1970s through the 1980s.  She appeared notably in "Big Bad Mama" (1974) as a snooty kidnap victim; as Tom Skerritt's terrorized wife in "The Devil's Rain" (1975); and as Dick Van Patten's smart attorney daughter-in-law on TV's "Eight is Enough" from 1979 to 1981 (a role she reprised in the two reunion TV movies in 1987 and 1989).  She later married and focused her attention on raising her family.  Prather gives an incredibly underrated, unaffected, and natural performance in "Smile," which is why her character is so touching and has such resonance and impact.  She is never mannered nor resorts to a bag of tricks that actors normally use to try and stand out.  She is so skillful at embodying that character in the movie that you don't think of her as "acting," even though I believe she has the most difficult role in the entire cast.  I think the other characters in "Smile" were arguably easier to play because they were so broad and unsubtle.  It's always easier to play characters who are more overt because it's all there on the page.  It's much harder to play a nice, "normal" person and still make them interesting and compelling to watch, and that's what Joan Prather achieves here.  She is the Unsung Heroine of "Smile."
Copyright and Posted by Hill Place at 7:21 PM