A "Handsome" performance by William Gargan 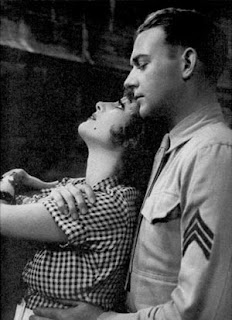 Director Lewis Milestone's 1932 film version of  "Rain" (based on W. Somerset Maugham's short story) is primarily remembered as one of Joan Crawford's misfired vehicles.  Crawford herself often dismissed the film in interviews, deriding her own work in it.  It is also remembered for Walter Huston's vivid performance as the self-righteous missionary who attempts to reform Crawford's character, a prostitute from the United States who is fleeing from her past.  While I have always enjoyed Crawford and Huston's work throughout their careers, they are not the ones who stand out for me in this film.  No, it's William Gargan's touching performance as a lovestruck Marine Sergeant who intrigues me every time I watch this film. 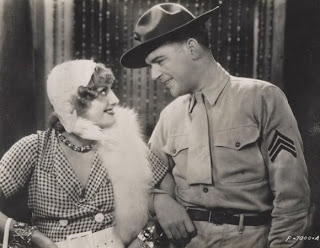 Gargan plays Sergeant Tim O'Hara, a Marine serving in Pago Pago who is dazzled by Crawford's Sadie Thompson.  From the moment they meet, it's clear that "Handsome" (Sadie's nickname for O'Hara) is impressed by her beauty and charm.  "Handsome" realizes that Sadie is a prostitute and has an unsavory past and background, but he still sees her goodness and virtues.  He wants very much to take her to Australia after he gets out of the Marine Corps so they can marry and have a life together.  What I liked about Gargan's interpretation of the role is that he does not have a deluded impression of who Sadie is.  He is not as naive as some would interpret him to be.  He even says at one point, "This isn't my first year away from home, ma'am.  And I ain't been run over yet!"  "Handsome" knows what Sadie is and what she has done in the past, but still sees her positive qualities in ways that Walter Huston and his prudish wife Beulah Bondi cannot.  As he says at one point "Knowin' the worst to begin with, isn't always the worst way to begin."  In contrast, Aldo Ray, who played Sergeant O'Hara in the remake "Miss Sadie Thompson" (1953) is repulsed when he learns that Sadie (played by Rita Hayworth) is a prostitute and declares that he can't imagine ever marrying her.  At the end of that version, Aldo Ray's O'Hara comes around and says he wants an opportunity to try and forget about Sadie's past so that they can be together.  The beauty of William Gargan's version of this same character is that his heart is open enough to love Sadie for who she is, not what he thinks she is. 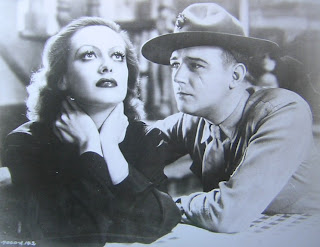 At one point in the 1932 version, Gargan's "Handsome" pleads with Crawford's Sadie to not become affected by the missionary's adverse influence upon her and to come with him to Australia.  The missionary  appears to have caused Sadie to undergo a religious conversion that has convinced her she must return to her native San Francisco and serve prison time for a crime for which she insists she was framed.  When O'Hara encounters Sadie, after he has been locked in the brig for a week due to the missionary's interference, she appears to be in a trance and insists that the only way she can be redeemed is to go to prison, even if she was not guilty of that crime.  "Handsome" pleads with her by saying, "Sadie, ya ain't yourself...Remember I told you if you ever needed a friend, I'd be here?  Well you need a friend right now.  You're not going to San Francisco, you're going to Sydney.  Sadie, out there you've got your whole life before you.  We'll go away where this rain or anything else can't bother us.  Just you and me.  Like Lefty and Maggie.  50-50.  You'll be Mrs. Tim O'Hara.  It's Sydney and us.  The whole works against the penitentiary.  And I'm takin' you whether you want to go or not!" 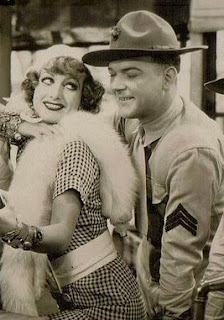 When Walter Huston's missionary comes upon the scene and scolds "Handsome" for trying to convince Sadie not to return to San Francisco, the Marine's tender side retreats momentarily as he castigates the missionary for his harmful manipulation of the once vivacious, but now vulnerable, Sadie.  In harsh tones that stand in stark contrast to his earlier tenderness towards Sadie, "Handsome" tells off the missionary and says, "What you're trying to do would make a hyena cry!...What kind of a man are you anyway, pickin' on this poor kid here?!  Gettin' her so she's half crazy?!...You're one choice specimen, I'll say that for ya!  They don't make your kind everyday!...I'm here to watch out that Sadie don't make any fool breaks!"  Sadie might bring out "Handsome's" kindness and warmth, but O'Hara remains a strong-willed Marine through and through, which makes the humanity and vulnerability that Gargan instills in the character all the more powerful and touching.  It's clear Sadie has had such a profound effect upon him he is not afraid to show his tender side and is willing to risk his career and his own freedom to take care of her. 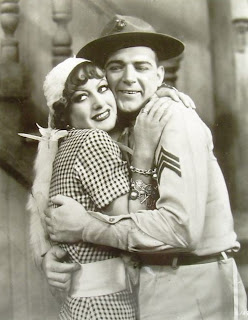 William Gargan was one of the premier character actors of Hollywood's classic era.  He often played stereotypical "Irish" type characters such as police officers, reporters, priests, and military personnel on both the big screen and radio, and later in television.  He was always warm and sympathetic in his performances, but rarely was he called upon to be a romantic leading man as he was in "Rain."  Gargan and Crawford have a wonderful chemistry that is a pleasure to watch.  Similar to the way Sergeant O'Hara can see the good in Sadie, she returns the favor in the endearing way she calls him "Handsome."  O'Hara has obviously never encountered a woman who makes him feel as special as Sadie does.  And Sadie has obviously never met a man who actually has her best interests at heart and who doesn't regard her merely as a sex object.  Sadie recognizes how rare O'Hara is when she tells him, "You know, you're an awful funny fella, Handsome."  The bashful O'Hara becomes so tongue-tied by Sadie's responsiveness to him that he can only say, "I guess I'm the dumbbell's King, all right."  As if realizing that this was his shot at being a romantic leading man, Gargan makes the most of the opportunity and instills a lot of heart and pathos in O'Hara.  You want Sadie and "Handsome" to have a happy ending, and you cheer at the end when they leave together for Australia.  Gargan would mostly play character roles throughout his distinguished career.  He played leads in "B" movies and supporting roles in "A" productions.  He was nominated for a Best Supporting Actor Oscar for 1940's "They Knew What They Wanted."  He has been mostly forgotten by today's movie audiences, but richly  deserves rediscovery.  For anyone interested in becoming better acquainted with William Gargan's work, "Rain" is a good place to start.
Copyright and Posted by Hill Place at 6:58 PM