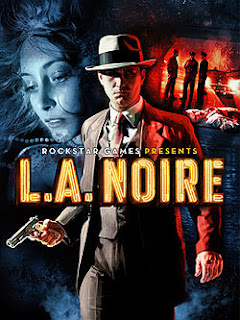 I was never a video game enthusiast until I heard about the mystery-solving game "L.A. Noire," developed by Team Bondi and published by Rockstar Games, which came out last year.  Being a native of Los Angeles, and a fan of James Ellroy and film noir movies of the 1940s and 1950s, I was intrigued with its premise of recreating in vivid detail 1947 Los Angeles prospering under the post war boom.  Since I like to wear well-tailored suits and Fedora hats to work every day, I happened to liked the setting and atmosphere that the game promised.  So I bought it and played it on my brother's Xbox 360.  I didn't realize what I was getting into!  Even though acclimating myself with the controls in order to participate effectively in the action scenes took some getting used to (I never did get fully get the hang of it), I loved every minute of "L.A. Noire."  Each of the mysteries were fun and involving.  The period detail was mesmerizing.  Los Angeles, its streets, buildings and landmarks, simply came to life in a way that is difficult to describe if you have not seen or played the game.  I enjoyed driving through the city just taking in the sights.  But that wasn't all.  The ability of the characters to move about naturally and realistically, as well as have facial expressions that were fully-dimensional, helped create a gallery of fascinating personalities that existed in a world I gladly handed myself over to and didn't want to leave.  I now realize how video games are indeed a new art form that remains ever-evolving. 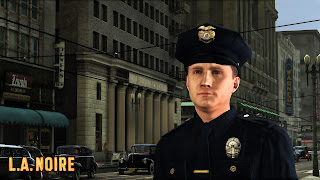 One of the reasons I enjoyed the game so much was putting myself in the shoes of its main character, Cole Phelps (played by Aaton Staton).  As you are playing the game, and playing Cole Phelps, you actively participate in his journey as he rises from being an LAPD patrol officer to becoming a plainclothes detective working in the Traffic division, then in Homicide, and then Vice, and finally in Arson.  You put yourself in Cole's shoes and become the character as you are playing the game.  I found Cole was a easy character to want to identify with and become.  He was a decorated war hero, handsome and successful, and happily married with two daughters, who had keen skills of reasoning and was athletically spry that he could take on any antagonist that crossed his path.  Oh, and he wore beautifully tailored suits and uniforms that were flattering.  Some people say they want to be James Bond.  I wanted to be Cole Phelps.  He became the friend you always wanted to have, and I really grew to love that guy.  The game was enjoyable in how you could allow yourself to become the person you always thought you wanted to be for a period of time while you are playing him. 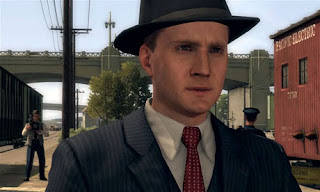 Which made the latter part of the game so devastating when it became apparent Cole was extremely flawed and nowhere the hero that you foolishly believed him to be at the outset.  That, I suppose, is the underside of identifying far too much with any character who is a work of fiction.  In the later parts of "L.A. Noire," Cole's tortured past in World War II catches up to him.  It turns out he was not the war hero that his military record suggests him to be, but a deeply flawed leader whose actions led to the death of civilian Japanese women and children by the men under his command.  All the flashbacks to the war, interspersed throughout the game, start to make sense when the storylines culminate in the revelation of Cole's weaknesses.  This was compounded by his fall from grace within the LAPD when his illicit affair with German nightclub singer Elsa Lichtmann, a character I was not fond of, came to light and caused him to lose his family and become persona non grata within the police force.  Cole finds himself demoted to arson and having to prove himself all over again.

It's in the latter part of the game that another character named Jack Kelso, who served with Cole in the Marine Corps, takes over from Cole and becomes a playable character in the game.  Suddenly, the game makers pull the rug out from under you and focus all of their sympathies and admiration upon Kelso, who you had not been thinking much about up to that point.  While playing Kelso, you discover that he proves to be the honorable person that you had assumed Cole was all along.  I have to admit that this shifting of attention and sympathies from Cole to Kelso proved to be difficult to adjust to.  Because I enjoyed playing a character who I thought I could greatly admire and aspire to be like, I did not want to be forced to acknowledge that Cole (as talented as he was) was none of the things that he was assumed to be and that his rival Kelso was actually the person who should be admired as a man of honor.  I was disappointed in Cole and felt as betrayed as the other characters in "L.A. Noire" who felt let down by him. 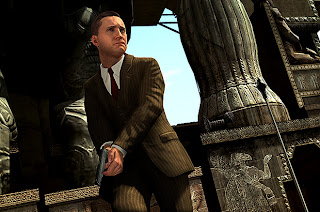 I wanted Cole to have a redemption at the end, which made the final case incredibly suspenseful as Cole and Kelso worked together to try and bring the true villains (who had set Cole up for defeat) to justice.  I wanted Cole to return to being the man I thought he was, because I had invested so much of my time playing the game and I thought I wanted to be just like him.  I truly did not like this character revelation about Cole because I found little reason to identify with him anymore.  And I didn't like the abrupt shifting of sympathies that forced me to have to play another character, Kelso, that I hadn't invested as much time and affinity with.  So the last game of "L.A. Noire" resonated deeply with me because I wanted Cole to climb back to where he once was.  When Cole sacrifices his life at the end to save the other characters he has grown to care about, it was shocking.  I felt as if I had lost a friend. 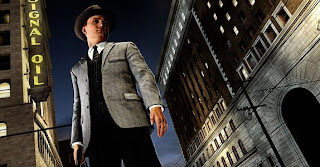 I was absolutely amazed at how a video game could have the sort of emotional resonance and depth that you would expect from a great novel or movie.  The makers of "L.A. Noire" were absolutely brilliant in creating a character that you wanted to become, and then doing a 180 on you by completely stripping him of everything that mattered.  The loneliness that Cole feels after his fall from grace was incredibly palpable.  I no longer look at video games with the sort of disinterested detachment I once had.  I now realize how it is possible for them, in the right hands and with the right premise, to tell a great story as well as create a game that is fun to play.  Aaron Staton, who plays Cole in "L.A. Noire," creates a fascinatingly flawed character.  Because of Staton's sensitively nuanced performance, you admire Cole for all of his strengths and talents, but ultimately grow to care about him deeply because of his human vulnerabilities.  The amazing thing about his work, as well as the work of the other actors who are in "L.A. Noire," is how they do not allow the incredible technology of the game to overcome the humanity of the characters and the story being depicted within it.  It has more going for it than most movies and TV shows these days.  I truly hope that the makers of "L.A. Noire" make a sequel, as it vividly created world that I would very much enjoy returning to someday.
Copyright and Posted by Hill Place at 5:41 PM