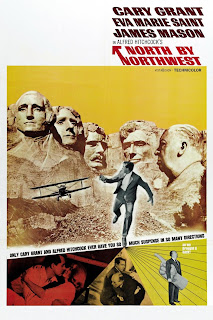 A couple of years ago I was shopping for a new suit when I found a light blue/grey suit that caught my eye.  As I was trying it on and looking at myself in the mirror, I realized that it reminded me a great deal of the suit Cary Grant wore while playing hapless Madison Avenue advertising executive Roger Thornhill, pursued by both spies and the police, in Alfred Hitchcock's "North by Northwest" (1959).  I purchased the suit and always enjoy wearing it, particularly because of the compliments I get from people.  As an inside joke with good friends, I dubbed my suit "The Cary Grant Suit."  (I subsequently dubbed other suits that I bought "The James Stewart Suit," "The Sean Connery Tuxedo," "The Joel McCrea Suit," etc.)  In actuality, my "Cary Grant Suit" doesn't come anywhere close to being as perfectly tailored and elegant as the one Grant actually wore in the movie.  Mine was bought at Jos. A Banks and, even though it's a good suit, it's missing that attention to detail that made Cary Grant's actual suit from "North by Northwest" so special.  This made me wonder what it was about the Cary Grant suit that has made people continue to admire it through the years. 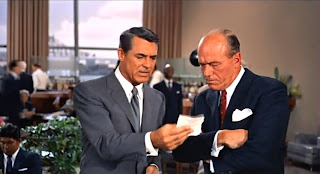 I think one reason has to do with the utter simplicity of the suit.  It's a two-piece, lightweight wool Kilgour suit, in a blue/grey fine glen plaid pattern, that is easy to move around in and is just elegant enough to be impressive without ever becoming overly ostentatious.  As such, it's the perfect suit for a Madison Avenue advertising executive like Roger Thornhill to wear to work and attend conferences and meetings in.  It's also ideal for cocktails and dinner with clients and friends after work because it balances elements of formality and leisure to compliment both types of occasions.  It's also the perfect suit for Thornhill to wear while he is being pursued across the country by law enforcement officials and enemy agents out to kill him.  It allows him to blend into the crowd easily without being noticed and is also tailored for comfort as well as elegance so that he can make a quick getaway when necessary.  It may be the most athletically tailored article of clothing in the history of cinema. 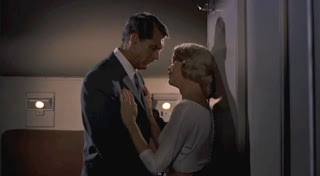 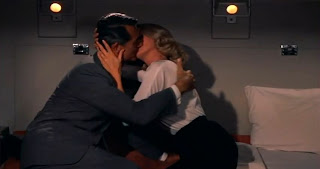 The understated elegance of the suit also comes in handy for Thornhill when he is enjoying a romantic flirtation and interlude with the industrial designer he meets on the 20th Century Limited to Chicago, Eve Kendall (Eva Marie Saint).  The simple and clean lines of the suit help to enhance Thornhill's handsome features and athletic physique and ensure that he doesn't come across as stuffy and officious the way a less flattering suit might make him appear.  The suit allows Thornhill to be relaxed around Eve Kendall so that he can turn on his charm and let his guard down for just a brief moment as he is making love to her in her cabin.  The comfortable flexibility of the material used for the suit is also essential for the moments in the movie where Thornhill is forced into uncomfortable positions and situations while eluding either capture or death.  Because the suit is not overly layered with thick, heavy material, he can easily hide in the upper berth of Eve Kendall's train cabin when the police inspect the room in order to question her about her conversation in the dining car with Thornhill. 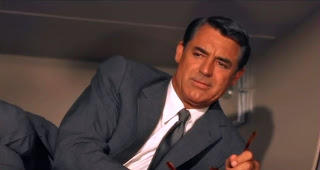 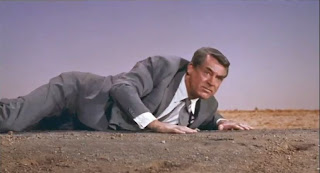 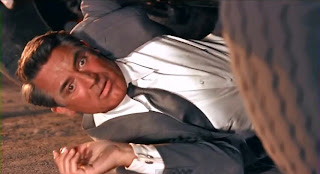 It also allows him to easily run to safety when being pursued by the crop dusting plane pursuing him in the middle of the cornfield, and provides enough of a cushion when he is knocked to the ground by the gasoline tank truck that screeches to a halt and almost runs him over as he tries to signal it to stop in the middle of the highway.  The light blue color of the material of the suit also does a good job of camouflaging the pesticide from the crop duster that is covered all over his suit, after he survives that attempt on his life, so that he does not make himself overly conspicuous when he arrives in Chicago and seeks out Eve Kendall at her hotel.  The elegance of the suit allows Thornhill to maintain his dignity when he is forced to do embarrassing things to stay alive, including making nonsensical bids at an auction where he is surrounded by enemy agents, so that he can become enough of a nuisance and be saved by the police who have been called in to remove him.  Later, in the movie, when Eve Kendall pretends to shoot Thornhill in a crowded cafeteria at the base of Mount Rushmore, in order to deflect suspicion away from her true identity as an agent for American intelligence, the flexibility of the suit again allows Thornhill to gracefully fall to the ground, and pretend to be dead, for the benefit of fooling villain Philip Vandamm (James Mason) into believing that Eve is on his side. 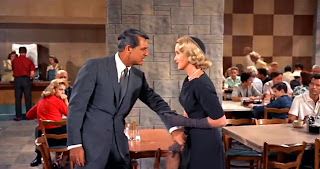 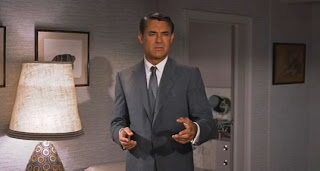 But what's really special about the suit is its ability to enhance Roger Thornhill's inherent charm and sex appeal without ever making him too larger-than-life and, as a result, inaccessible to the audience.  The suit helps to accentuate Thornhill's warm, friendly, down-to-earth qualities that make it easy for the audience to root for his survival throughout the movie.  The suit never makes Thornhill come across as an elitist fop who the audience would have difficulty sympathizing with.  The suit makes Thornhill look dapper, not dandy, and also enhances his inherent masculinity so that it makes sense he would proactively and assertively attempt to uncover the nature of the conspiracy that has made him a wanted man with both the police and Vandamm's men.  Thornhill already has many positive qualities as an individual that the suit merely helps to augment and illustrate.  The same suit wouldn't have the same effect if it were worn by another actor because it wouldn't be as complementary. 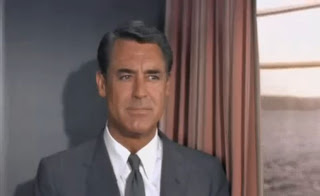 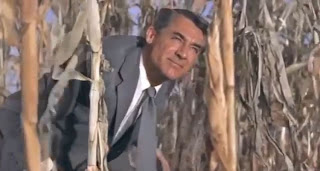 James Stewart, who purportedly wanted to play Thornhill in "North by Northwest," wouldn't have been as effective if he had been cast as Thornhill, instead of Grant, and wore the same suit.  Because of his more folksy nature, had he been cast in "North by Northwest" instead of Cary Grant, Stewart would likely have worn a suit made of heavy wool, flannel, or tweed instead of the lightweight wool used for Grant's suit.  The only other suit that has a similar effect on a movie character are the perfectly tailored Tom Ford suits Daniel Craig has worn in the James Bond movies "Quantum of Solace" (2008) and "Skyfall" (2012).  Like the famous Cary Grant suit, Craig's suits as Bond help reflect and enhance his own sex appeal, masculinity and other inherent strengths.  I think the reason why people admire the Cary Grant suit so deeply is because they seem to subconsciously understand that it was the perfect blending of the right man wearing the perfect suit under ideal circumstances.  In this instance, it's neither the suit that makes the man, nor the man that makes the suit, but a combination of both.  Cary Grant's suit in "North by Northwest" demonstrates how it's both the man and the suit that help to bring out the best in each other.
Copyright and Posted by Hill Place at 7:14 PM