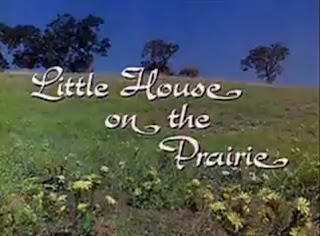 I read in the news today that researchers have diagnosed the cause of the blindness experienced by Mary Ingalls, the real-life sister of writer Laura Ingalls Wilder who was portrayed by Melissa Sue Anderson on the series "Little House on the Prairie" (1974-83).  I remember as a child feeling shocked and unsettled at how the series dramatized Mary's loss of vision and her struggles to adjust to her new condition.  The raw, painful emotions evoked by that storyline were not what I expected to see from a "family" oriented TV show.  When I think of the scene where Mary wakes up one morning, and is unable to see, I think of the silent close-up of her devastated mother Caroline (Karen Grassle), who was busy nursing her youngest infant child downstairs and is helpless to do anything to bring comfort to her oldest child in her time of despair.  Caroline's close-up drove home, when I was still at a young age, how deeply our parents continue to care for us no matter how grown up we've become.  During the 1970s and 1980s, I used to watch both "The Waltons" and "Little House on the Prairie" regularly.  Even though the success of "The Waltons" established its production company, Lorimar, as a major player in Hollywood and later led to the creation of "Dallas," "Knots Landing," "Flamingo Road," and "Falcon Crest" (which, as I have blogged before, were also in their own ways seminal and influential shows of my youth), I always preferred "Little House on the Prairie" over "The Waltons."  I realize in retrospect that one reason for my preference for "Little House" was because, underneath the warmth and fuzziness, was a very, very dark and somber view of the world surrounding the Ingalls family. 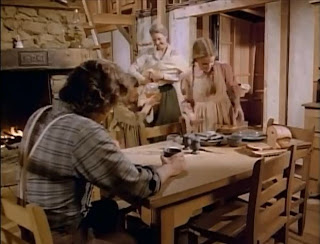 The central Ingalls family in "Little House" may have been good and decent people, but they lived in a world that was often cruel and frightening.  What is often forgotten is the fact that Mrs. Oleson (Katherine MacGregor), and her children Nellie (Allison Angrim) and Willie (Jonathan Gilbert), were some of the most vicious, nastiest characters to ever appear on television.  The fact that they were sometimes redeemed made them even more formidable because you knew that these were not one-dimensional villains--these were villains that could occasionally appear in the form of identifiable human beings.  I was grateful as a child that the show played up the uproarious rivalry between Laura and Nellie, because I knew that the show had a sense of humor about itself and wasn't going to get too serious and heavy-handed like "The Waltons" was.  The show was also much less hypocritical about itself than "The Waltons."  The matriarch on that show, Olivia Walton, may have ostensibly been categorized as a traditional, nurturing mother.  But, when you look closely at some episodes, she reveals herself to be closed-minded, domineering, and uptight--the kind of woman who will only love her family and children on HER TERMS, and with conditions.  (Olivia Walton seemed to foreshadow "Waltons" creator Earl Hamner's protagonist Angela Channing, played by Jane Wyman, on his later series, "Falcon Crest.")  But "The Waltons" continued to behave as if Olivia Walton was kind and understanding.  Olivia Walton projected all the warmth, compassion, and vulnerability you would expect from a character played by an actress named "Michael Learned." 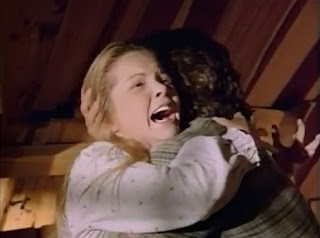 What distinguished "Little House" was its surprisingly brutal and hard look at the world and humanity.  I remember as a child being shocked at three particular episodes: 1)  The aforementioned episode where older sister Mary loses her sight and withdraws into herself, 2) The one where the school for the blind burned down and both the Alice Garvey (Hersha Parady) character (a regular character for about 4 years up that point) and Mary's newborn baby perish within the flames, and 3) the episode where adopted brother Albert (Matthew Laborteaux) falls in love with a girl who is raped and becomes pregnant by a vicious assailant stalking Walnut Grove.  Throughout the run of the series, there were deaths, prejudice, alcoholism, substance addiction, and even surprising cruelty coming from our main protagonists.  One such episode included the segment where Laura (Melissa Gilbert) blames Doc Baker (Kevin Hagen) for the death of her newborn son.  Looking for someone to strike out at, she ostracizes Doc Baker to where she almost forces him to leave Walnut Grove.  Clearly, this was a show where there was much more than meets the eye. 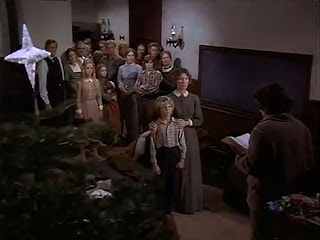 I think the reason why "Little House on the Prairie" was, ultimately, a legitimately family-oriented show is that there always remained a moral center to the series.  Despite the fact that it never shied away from acknowledging the dark side of humanity, it always balanced things out by underscoring how there were still good, decent, caring and conscientious people in the world who would work hard to fight back against the cruelty that exists out there.  The show also never treated its characters as expendable individuals.  It created a rich gallery of recurring characters living in Walnut Grove who would reappear from time to time to help establish a strong sense of continuity and community.  (Similar to the way "Dallas" created a gallery of recurring supporting characters that helped establish that show's sense of community.)  I think it was a good show for young people to watch because it showed how both good and bad existed in the world and made a strong case for young people to strive for the best in themselves and to never take people around them for granted.  What I also give "Little House" credit for was that it never forced an inappropriate happy ending on the audience.  There was one episode where the kind school teacher Miss Beadle (Charlotte Stewart) makes the wrong judgment call and sends her students home early on Christmas Eve right before a raging blizzard hits the area.  The children are all caught in the eye of the storm, as the men of the town risk their lives to find their children.  One husband dies, while everyone else survives.  At the end of the episode, as Charles Ingalls (Michael Landon) stands before everyone in the school/church reading from the Bible in an effort to put what they've experienced into context, the camera lingers on the one family who has lost their husband and father.  Amidst the happiness of the other characters who have survived, the show quietly and somberly acknowledges the loss experienced by the one family whose lives are irrevocably changed by the blizzard. 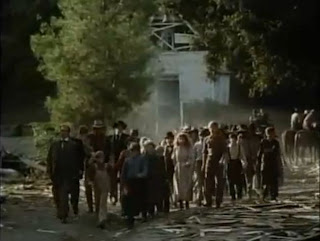 This brutal reality continued to characterize the show even at the very end of its run.  In the 1984 TV movie "Little House: The Last Farewell," that wrapped up the series, the residents of Walnut Grove learn, to their chagrin, that their town is actually built on land owned by a nasty land baron, who intends to take over and turn the citizens into his indentured servants.  And how do the denizens of Walnut Grove react to this nasty turn of events?  By turning the other cheek?  By praying?  No, they react to it by blowing up the town in an anarchic finale that has to be seen to be believed.  The townspeople take control of their destinies and decide that they will not allow the land baron to enjoy the fruits of their hard-earned labor through the years.  And, yet, the show still retains a strong sense of decency about itself even as it reveals that it was not nearly as innocent or white-washed as one would presume it to be. As the townspeople file out of town, singing "Onward Christian Soldiers," you realize that Michael Landon was both a traditionalist and an anarchist at heart because he had the courage to dramatize all different shades of humanity on his series.
Copyright and Posted by Hill Place at 4:16 PM