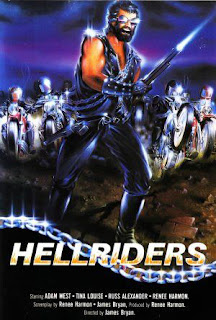 Since today is Tina Louise's birthday, it seems appropriate to blog about one of her movies.  I thought of blogging about the TV movie "Friendships, Secrets and Lies" (1979), which is purportedly one of her favorite roles, but I'm just not in the mood.  Perhaps the movie that demonstrates what an effective actress she can be, even under trying circumstances, was her appearance in the low (very low) budget biker flick "Hell Riders" (1984).  In this incongruous throwback to a genre that hadn't been seen much since the late 1960s/early 1970s, Louise played Claire Delaney, a traveling hooker from Las Vegas with a heart of gold who is driving across the desert when she encounters car trouble.  She pulls off the main highway to try and reach the nearest town, a small hamlet in the desert called Ramsburg, where she stops to help what appears to be a woman in trouble.  To Claire's surprise, she has fallen into the trap set by the vicious motorcycle gang known as the Hell Riders.  Led by the malevolent Snake (Ross Alexander), the Hell Riders harass Claire until she is able to make a break for it and speeds away towards Ramsburg.  In town, Claire encounters the unfriendly Sheriff Bates (Jerry Ratay) who remains skeptical about her reports of a vicious biker gang terrorizing the local environs.  Claire stops by the office of Doctor Dave (Adam West) who dresses her wounds and the two enjoy a mutual attraction.  Meanwhile, the Hell Riders arrive in town and harass the denizens of the town enjoying a meal at the local diner.  While Claire goes to check on her car, which she left at the local service station, Doctor Dave single-handedly dispatches the Hell Riders, and orders them out of town.  Since her car won't be ready until the morning, Claire spends the night at Sheriff Bates' home and befriends Bates' teenage daughter Suzy (Chris Haramis) and Bates' straight-laced wife Alma (Sandra Sterling).  Meanwhile, the Hell Riders, after being kicked out of town by Doctor Dave, murder a hapless sight-seeing married couple named Allen and Vera (Dennis Mancini and Lynn Wiedemayer) and start to plot their revenge upon the citizens of Ramsburg.  The next morning, the Hell Riders return to lay siege upon Ramsburg, terrorizing the residents and locking most of them up in the local jail.  Meanwhile, Claire attempts to elude the biker gang by leading them on a high-speed car chase out of town.  The movie ends with Claire and Doctor Dave joining the townspeople in a battle against the Hell Riders for ultimate control of Ramsburg. 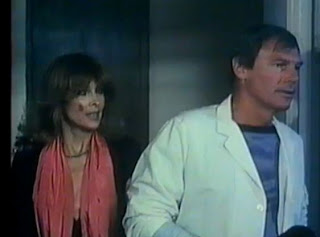 Never released theatrically in the United States and making its premiere on VHS video, "Hell Riders" remains a relatively obscure movie awaiting cult rediscovery.  The premise of having Tina Louise and Adam West, two 1960s television icons, in a movie where they battle a motorcycle gang is just too good to be true.  Even though "Hell Riders" is often a crudely-made, unevenly paced movie, it's still extremely entertaining.  Despite its low-budget, the script for "Hell Riders" is at times surprisingly ambitious for a film of this nature.  Director James Bryan, who co-wrote the screenplay with producer/co-star Renee Harmon (who also plays Knife, a member of the "Hell Riders") populates the script with a large supporting cast of characters comprising the denizens of Ramsburg.  Not only does the script include a potential romantic attraction between Claire and Doctor Dave, it's also got a love triangle subplot involving local garage mechanic Joe (Frank Millen), the fiance of Sheriff Bates' daughter Suzy and one of the waitresses at the local diner Betsy (Tania Anatole).  And that's only a portion of the cast of characters living in Ramsburg.  There are so many characters that, at times, "Hell Riders" feels like a sleazy, grindhouse version of a Robert Altman movie.  Most of the supporting cast, with the notable exception of Sandra Sterling, Frank Millen, and Chris Haramis, are dreadful beyond belief.  Jerry Ratay, in particular, gives the worst performance in the cast as the pompous Sheriff Bates.  However, the movie is still notable as a testament to the enduring professionalism of Louise and West.  West is his usual relaxed, easy-going self, while Louise seems completely committed to her role. 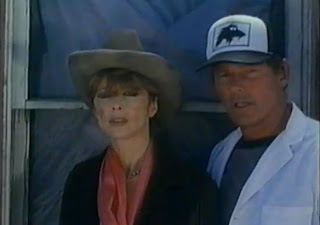 Even though "Hell Riders" was likely not Tina Louise's notion of an ideal vehicle, it still offered her a relatively decent part to play.  As written and portrayed in the movie, Claire overcomes her character's seedy background as a prostitute by exhibiting traits of warmth and decency.  Throughout the movie, Claire treats the characters she encounters in Ramsburg (except for the Hell Riders and the lascivious Sheriff Bates) with dignity and respect.  She befriends Suzy Bates and attempts to offer her helpful mentoring and advice on being careful about the choices she makes for herself as she decides whether to stay in Ramsburg and marry Joe, or leave for college.  Claire's underlying strength of character also appears to have won over Sheriff Bates' straight-laced wife Alma, who we would have expected to have been much more uptight around this woman of "loose" morals.  In perhaps the best acted scene in the movie, as Claire is packing to leave and go pick up her car, Alma offers to drive Claire into town and warmly welcomes Claire back to visit anytime she happens to be passing through Ramsburg again.  After being treated shabbily by the Hell Riders, and by Alma's own husband, Claire seems sincerely touched by Alma's genuine expression of hospitality.  Louise and Sandra Sterling manage to evoke an unexpectedly authentic moment of friendship that overcomes the movie's inherent deficiencies.  In addition to these moments, "Hell Riders" offered Louise a rare opportunity to play an assertive action heroine.  During the action-packed finale, Claire escapes from the Hell Riders by stealing a car and leading members of the gang on a high-speed chase into the desert.  She then attempts to elude them by scaling a rocky hillside as they give chase below.  She then returns to town and joins the denizens of Ramsburg as they fight off the remaining members of the Hell Riders in an action-packed shootout where she saves Doctor Dave from getting run over by the last of the motorcycle gang attempting his final act of revenge before he's killed by a hail of bullets. 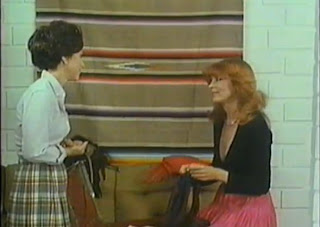 I am not trying to suggest that "Hell Riders" is a good movie by any stretch of the imagination.  I wouldn't blame people if they thought it really stunk.  I'm just suggesting that it has some redeeming qualities that indicate it's not as worthless or expendable as people might think.  I've shared the movie with countless people in Washington, DC who have all indicated that they enjoyed it thoroughly and hope it will be released someday on DVD.  I loaned it several times to one of the security guards working at my law school's library, ironically nicknamed "Miss Tina," who showed it to her entire family and turned them into fans of the movie as well.  (I recall Miss Tina sharing an anecdote with me where she described how she told her visiting relatives one evening "Have I got a movie for you!"  Her relatives all asked, "What do you have to show us?  'Dreamgirls'?  To which Miss Tina replied, "No, I've got something better to show you than that garbage.  'Hell Riders.'"  Later, when Miss Tina was visiting her relatives at a family reunion several of them said, "You know, I want to see that movie again.")  So there is an audience out there that is waiting to discover the unusual joys to be found in "Hell Riders."  What hurts the movie is the fact that director James Bryan was only able to afford Tina Louise and Adam West to work on the movie for one day.  (They each purportedly received $10,000 for one day of work, for a movie whose total budget was $80,000 and whose entire shooting schedule totaled 10 days.)  I got to know Mr. Bryan personally a few years ago, and he shared some anecdotes about the making of "Hell Riders" with me.  Evidently, Louise and West both worked on the movie on the same day and Mr. Bryan shot their roles mostly in close-up.  He later intercut their footage with scenes featuring doubles for both Louise and West interacting with the rest of the cast.  Claire and Doctor Dave are each wearing distracting hats throughout the movie in an attempt to try and hide the fact that doubles were used in most of the scenes with the supporting actors.  Mr. Bryan said he enjoyed working with both West and Louise, noting their professionalism, and that Louise worked as hard as possible to create a real character within the 12 hour shooting schedule allocated for that day.  He recalls that, even though it was a low-budget exploitation film, she still approached it with energy and enthusiasm.  With regards to the aforementioned scene where Claire is touched by Alma's hospitality, Mr. Bryan indicated that the scene, as scripted, was more straightforward and perfunctory, much less warm and personable.  (See below for excerpt of the scene from the original shooting script.)  Louise and Sterling approached him between takes and indicated that they had an idea on how to bring some nuance to the scene.  Mr. Bryan gave his blessings and the final scene reflects their contributions.


In the film, the scene is very similar to what's in the script, but a few added lines brings some nuance to the moment that was not there before.  In the final version, Alma approaches Claire as she is packing to leave, and offers to drive her into town after Suzy has returned with the car.  Instead of being impersonal (like in the script), Claire warmly responds, while folding and packing her clothes, "Oh, Alma, that's so sweet of you but I think I'll just pack up my clothes here and walk into town and pick up the car and get an early start."  Alma invites Claire to return anytime, just as scripted, but it causes Claire to stop fiddling with her clothes for a moment, just long enough to demonstrate how deeply surprised and touched she is by Alma's warm gesture, and says with genuine, heartfelt humility, "Thanks, Alma.  You've really been nice.  Thanks so much."  In the scene, you get the impression that Claire has rarely been treated with kindness by a person of Alma's middle-class nature that it means a great deal to her.  The humility Louise brings to the scene is complimented by Sandra Sterling's Beulah Bondi-like maternal warmth as Alma.  Because this is one of the rare moments in the movie where Louise is actually interacting in the same shot with the supporting cast, instead of the ubiquitous double used for much of the movie, you get a sense of how much better "Hell Riders" would have been if it had a proper budget that would have allowed Louise and West to work on the movie longer and appear with the other actors.  I don't deny that Louise has a few awkward line readings (which could be attributed to the very brief and rushed shooting schedule) but in general "Hell Riders" reflects how Tina Louise never gave a lazy performance and made the most of every opportunity presented to her.
Copyright and Posted by Hill Place at 5:19 PM