Two and a Half Bond Girls on "The Fall Guy" 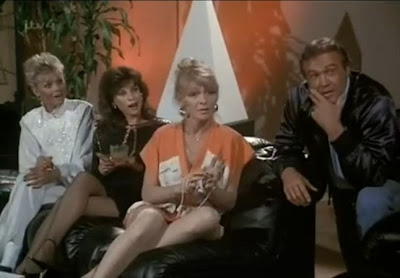 In 1984, in the wake of the dueling James Bond movies that were released the previous year--the official Cubby Broccoli produced Bond film "Octopussy" (1983) starring Roger Moore and the unofficial "Never Say Never Again" (1983) starring Sean Connery--the Lee Majors adventure television series about a veteran stuntman who moonlights as a bounty hunter, "The Fall Guy" (1981-86), did a tongue-in-cheek episode that paid tribute to all things James Bond entitled "Always Say Always," which aired February 22, 1984.  The title of this episode was itself a pun on the title of the aforementioned Sean Connery Bond movie.  In the storyline, Lee Majors' character Colt Seavers is in Hong Kong working on a fictional James Bond movie called "Always Say Always."  While over there, Colt and his colleagues Howie Munson (Doug Barr) and Jody Banks (Heather Thomas) become involve in a hunt for three Ming vases that involves unscrupulous smugglers (played by James Hong and Barry Ingham), a well-meaning art expert trying to find the vases and also clear his name of a murder charge (played by pre-"Star Trek: The Next Generation" Jonathan Frakes), and Chinese government agents (among them, famed character actor Soon-Tek Oh, who appeared in the 1974 James Bond movie "The Man with the Golden Gun) who are trying to ensure that the vases do not end up in the wrong hands. 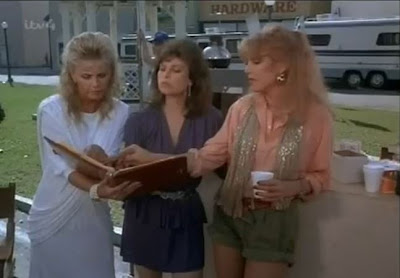 The most interesting aspect of this charmingly lame and goofy episode was how the story integrated the presence of Two and a Half former Bond Girls, playing themselves in this episode, who are supposed to be on-location reprising their prior Bond movie roles in this fictitious "Always Say Always" movie.  The Two Full-Fledged Bond Girls are Britt Ekland, who played Mary Goodnight in "The Man with the Golden Gun" (1974), and Lana Wood, who played Plenty O'Toole in "Diamonds are Forever" (1971).  The "Half" Bond Girl is Joanna Pettet, who played Mata Bond, one of the female leads in the James Bond spoof "Casino Royale" (1967), which was loosely based on Ian Fleming's first James Bond novel.  One of the amusing conceits of this episode is the presumption that there would ever be a James Bond movie where a prior love interest would ever return, something that's never happened in any of the real Bond pictures.  The other amusing conceit is the presumption, if there were to be a Bond picture with a prior love interest coming back and being involved in a new adventure, out of all the iconic Bond Girls who brightened the series, that they would be the ones who would be asked to return. 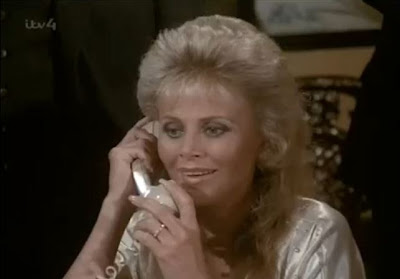 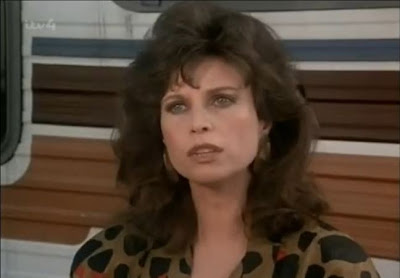 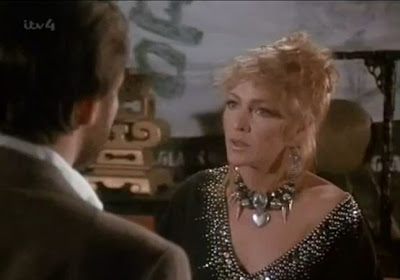 Despite whatever virtues these women have to offer, they hardly represented the best Bond Girls the series had to offer.  Britt Ekland has always been considered one of the weakest of all the James Bond Girls, chastised for having given a whiny and unsympathetic characterization in her Bond picture.  Lana Wood, while appealing and charming, had a very brief role in "Diamonds are Forever" and was killed off within minutes in the storyline of her movie.  As such, the likelihood of her ever returning in a future Bond movie was particularly dim.  And Joanna Pettet, who had the best part and gave the best performance of any of these three actresses in her so-called "Bond" movie, suffers simply by virtue of the fact that her "Casino Royale" was not part of the official series of James Bond movies. 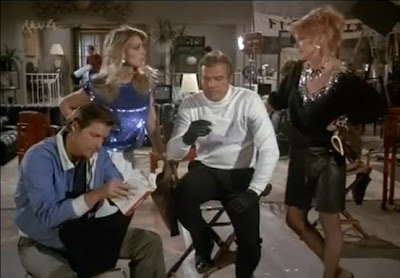 As such, we're left with a second-rate group of Bond Girls in a James Bond tribute episode that shamelessly cuts corners left-and-right by utilizing stock footage, attempts to substitute obvious California locations in place of actually filming in Hong Kong (at one point, in a sequence that is supposed to take place at a construction site, you can see the office buildings that comprise the Century City section of Los Angeles in the background), utilizes cheesy faux-Bond inspired musical cues to try and emulate Monty Norman's famous James Bond theme song, and concludes with a toothless cover version of Carly Simon's "Nobody Does it Better"--the theme song from "The Spy Who Loved Me" (1977)--playing over the end credits.  Somehow, the episode manages to rise above all of these deficiencies and still delivers an entertaining hour of television. 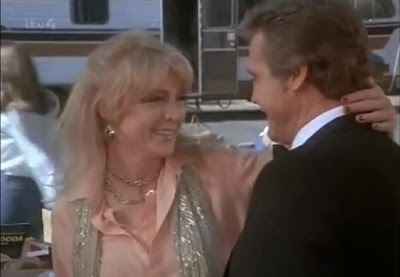 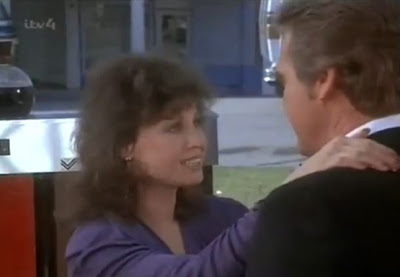 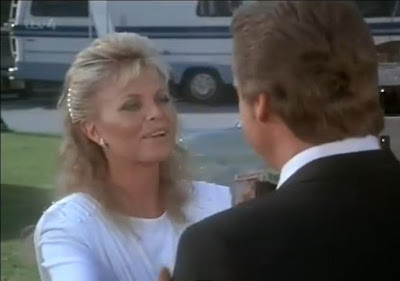 It's hard not to be amused with this episode right from get-go during the scene where Lee Majors' Colt Seavers, along with his partners Howie and Jody, spot the Bond Girls intently studying the script and going over their lines together.  In this fantasy-reality of Hollywood, these former Bond Girls are chummy and hold no grudges or competitiveness against one another.  The scene then establishes how each of the Bond Girls already know Colt Seavers personally and how each are very attracted to him.  (It's suggested that Colt may have had a prior relationship while working with each of them on their previous Bond movie.)  As "Joanna Pettet" tells Colt "I saw the stunt.  You haven't changed a bit!  You're still going for the brass ring!"  Then "Lana Wood" tells Colt "I'm always amazed how easy you make everything look!"  And finally "Britt Ekland" tells him "You appear to be in great shape!" 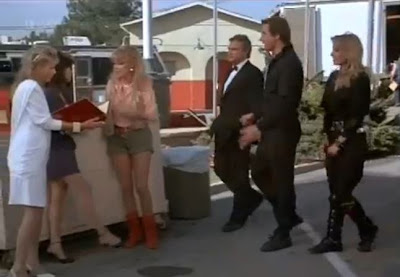 The scene then becomes a delightfully embarrassing mass of self-indulgence as the hapless Howie character ends up putting his foot in the mouth by complimenting "Joanna Pettet" on her performance as Plenty O'Toole, only to have her correct him by saying "Well, actually, I wasn't Plenty O'Toole.  I was Mata Bond.  But that's OK."  Howie then compliments a crestfallen "Lana Wood" on her performance as Mary Goodnight," only to have an indignant "Britt Ekland" interject, "Howie, I was Mary Goodnight."  As tacky as this scene sounds, I admired how it acknowledged the actual roles that each of these actresses played in their Bond movies, makes a joke about how some people find the actresses who played Bond Girls interchangeable, and then concludes by emphasizing that each and every one of them are actually their own unique individual and personality. 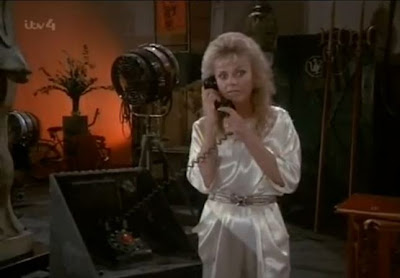 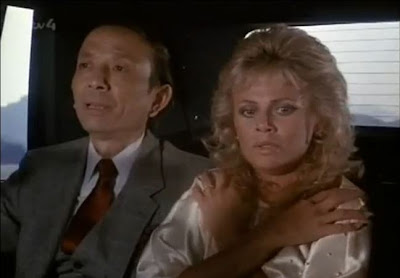 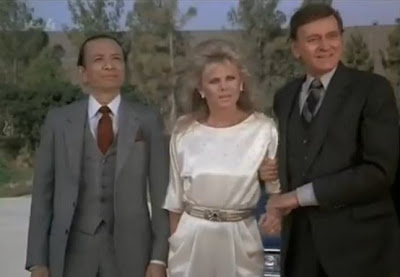 Throughout the episode, each of the former Bond Girls becomes involved with helping Colt and his crew in the search for the missing Ming vases.  Britt Ekland does absolutely nothing with her vignette, a final-act storyline where her character is kidnapped by the smugglers and held hostage in exchange for Colt returning the vases to their custody.  Ekland pouts and ambles through the proceedings with her usual air of haughty indifference, causing no damage but also adding nothing to the proceedings at the same time.  Ekland is particularly poor during the scene where the villains threaten to pump her with narcotics in order to make it appear that she died from a self-inflicted drug overdose.  Her emphatic line readings and facial expressions throughout the scene painfully underscores the extent to which she over emotes. 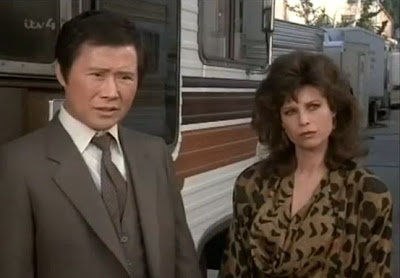 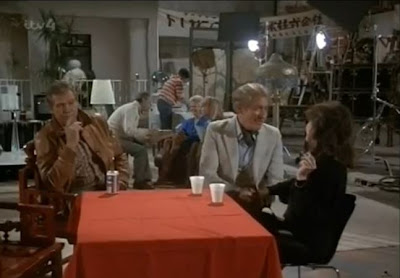 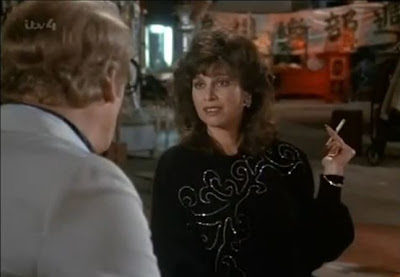 Lana Wood does better with a disappointingly short sequence where she charms a fawningly admiring British official into using his influence to help Colt and his team in the search for the coffin containing the Ming vases.  Even though it's a short sequence, Wood has the right air of conniving charm and light-hearted bantering.  She does particularly well with the double-take she registers when the British official informs her that his wife died at his country club's last golf tournament, and that they'll be dining alone.  It's too bad that the script doesn't allow her to get more involved in the action, as she is clearly game under the circumstances.  In contrast to Ekland, Wood tries hard to do as much as she can within the confines of the thin material and her professionalism is admirable. 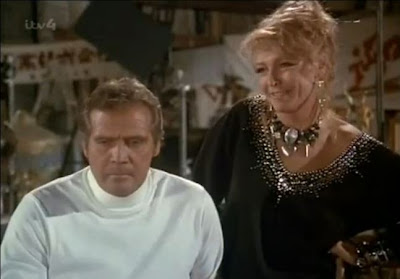 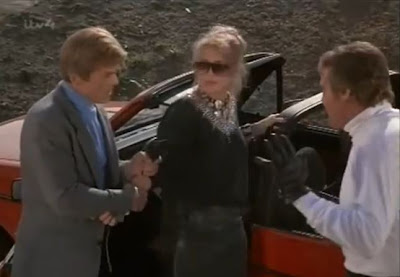 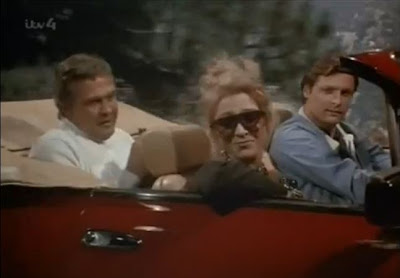 In the end, it's Joanna Pettet who walks off with the acting honors, as the script gives her the most substantive role to play of all of the "Bond Girls" appearing in this episode.  She is the one who inadvertently makes contact with Jonathan Frakes' art expert; convinces Colt Seavers to meet him at an acupuncture clinic in a dangerous part of Hong Kong in order to help him; is kidnapped by the villains; ends up in a car chase where Colt arrives by helicopter to rescue her; kicks her kidnapper in the shin so that he loses his weapon and is knocked unconscious by Colt; takes Colt to where Jonathan Frakes is hiding; witnesses two henchman enter the room and get the upper hand on Colt, Howie and Jonathan Frakes; and has the presence of mind to knock the remaining henchman unconscious by smashing a chair over his head.  In so doing, Pettet demonstrates the vivacious sense of adventure that she projected in "Casino Royale" while playing Mata Bond and even gets to make some fast and funny quips. 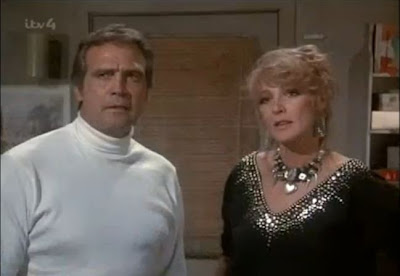 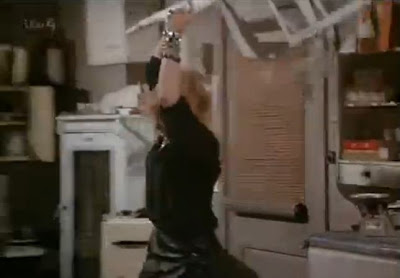 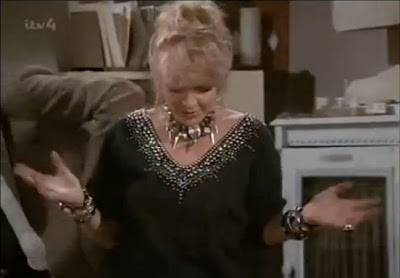 When Pettet comments how the neighborhood Jonathan Frakes is hiding at "is the sort of place where anything's for sale," Heather Thomas' sardonic Jody observes "Sounds like Hollywood," only to have Pettet wryly quip "With an egg roll on the side."  During the car chase, when Pettet's kidnapper asks her where Jonathan Frakes went to after she spoke with him, she petulantly pouts, "How should I know?  I'm an actress, not a tour guide."  When she knocks out one of the smuggler's henchman by smashing the chair over his head, a flustered Pettet jokes, "Well, it's not exactly an autograph, but he won't forget me!"  At the end of the episode, when Howie attempts to compliment Ekland, Wood and Pettet by indicating that their roles in Bond movies have ensured their places in film history, Pettet effectively mimics the voice of an elderly lady and jokes "Lordy, Lordy.  Where's my wheelchair?"  Pettet makes the most of the episode and appears to be enjoying herself even when it's clear that she's probably only doing this TV guest appearance for the remuneration.  (She also indirectly inspires the funniest line in this episode.  When villainous police inspector Barry Ingham informs James Hong's smuggler that a beautiful actress--Pettet--has become involved in the search for the Ming vases, an exasperated Hong bombastically reminds him, "There are many beautiful women in this world, but only three Ming Dynasty vases!") 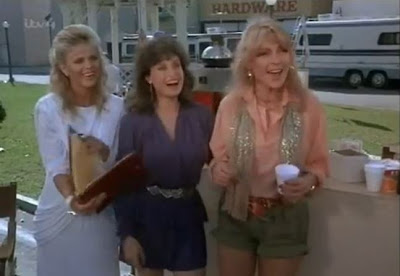 "The Fall Guy" episode "Always Say Always" remains one of the most elaborate examples of celebrating both the iconic images and motifs connected with the world of James Bond, as well as the individual contributions of the actors and actresses associated with the series.  For many Bond Girls--as well as the male actors who have appeared in the series--their Bond movie appearance is often the acting credit they can point to, out of many, that continues to be their calling card to be remembered in the annals of cinema. The episode underscores the fact that Britt Ekland and Lana Wood will always be remembered as Bond Girls, and I'm also glad it included Joanna Pettet in order to acknowledge her tangential, but ultimately undeniable, connection to the world of 007.  The episode is also unique in that it directly acknowledges the contributions of almost every variation of James Bond films up until that time.  The presence of Ekland, Wood and Soon-Tek Oh (and the use of "Nobody Does it Better" over the end credits) directly acknowledges the films of Sean Connery and Roger Moore in the official EON Productions-produced Bond films.  The presence of Joanna Pettet acknowledges the unofficial Charles Feldman-produced "Casino Royale" in 1967.  And, as indicated earlier, the title of the episode "Always Say Always" references the unofficial Warner Brothers-released Bond film "Never Say Never Again," which was Sean Connery's one-shot return to the role.  At the time, the series was only 22 years old, but James Bond had already made a strong enough  impact upon pop culture to inspire this unofficial tribute.  As Bond spoofs go, "The Fall Guy" episode "Always Say Always" still holds up as good, gimmicky fun.
Copyright and Posted by Hill Place at 6:16 PM