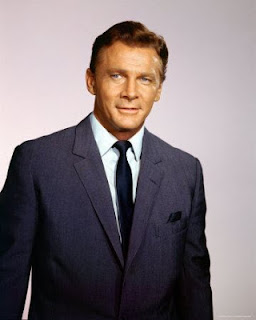 It's been announced this evening that veteran actor Steve Forrest passed away earlier this week at age 88.  Most obituaries will tout him as the star of the 1970s police drama "S.W.A.T." (1975-76), while others will mention that he was the younger brother of 1940s film star Dana Andrews.  I remember him best as a solid, versatile actor who just seemed to always be around in countless film and television appearances while I was growing up.  As a kid, I always thought of Steve Forrest as a big star, because of the prolificacy of his career and the quality of his work.  He always played roles that would only have been offered to a good, well-regarded actor.  I remember liking Steve Forrest from the moment I first laid eyes on him in the disaster TV movie/miniseries "Condominium" (1980), which I blogged about a few weeks ago. 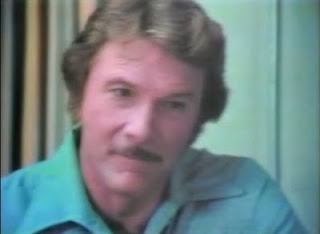 In that movie, he played a dashing, retired engineer named Gus Garver who had to deal with the recent stroke of his long-time wife Carolyn (Virginia Leith), acting as Chairman for a contentious condominium homeowners association, dealing with the discovery that the structure was built using shoddy materials and workmanship, and working diligently to try and prepare the residents for an impending hurricane that threatens to blow it all away.  During the course of the film, he finds himself attracted to Drusilla Byrne (Pamela Hensley), the beautiful associate of the sleazy construction magnate that built the titular condo, who has been planted in the building to spy upon the residents.  Gus forms a deep friendship with Dru based on mutual respect and kindness but is forced to end it when Dru admits her true feelings for him.  Despite his feelings for Dru, Gus loves his wife and would never do anything to hurt her while she is recovering in the hospital. 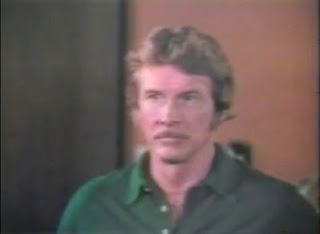 I guess Gus' decision not to get involved with Dru established the reason why I responded to Steve Forrest the way I did as a kid--he projected nobility in an effortless manner that never seemed dull or forced.  He made nobility seem incredible cool.  I will never forget the scenes in "Condominium" where Gus is visiting his wife in the hospital and his tenderness and concern for her well-being become apparent as he tries to cheer her up with happy thoughts and light conversation as she is recovering from her stroke.  Other actors would have self-indulgently played these scenes as if it were all about showing the audience, "Hey, look at me.  I'm acting!," but Forrest always remained focused on the fact that the scene was not only about Gus, but about both him and his wife.  Forrest did an excellent job portraying Gus' fears and vulnerabilities and courage at doing the best he can to bring a ray of sunshine and hope to his wife Carolyn, even as he worries what will become of them if she never recovers.  It's easy to see how Dru, who has a shady background, would be attracted to the decency of Gus and Forrest was superb in conveying this quality. 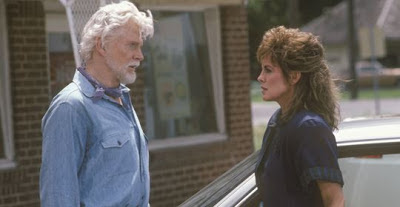 Forrest's noble qualities were also apparent in many of his other TV appearances.  I also vividly remember him from the 1986-87 season of "Dallas" playing the controversial Wes Parmalee, a mysterious ranch hand working at Southfork who turns everything upside down when he alleges that he is actually Jock Ewing, the long lost patriarch of the Ewing family, who apparently died five years earlier when his helicopter crashed into a swamp while wildcatting for oil in South America.  After a couple of seasons of disappointingly dull "Dallas" storylines, the Parmalee narrative kicked the show back into high gear again as JR (Larry Hagman) and Bobby (Patrick Duffy) and Miss Ellie (Barbara Bel Geddes) had to confront this stranger who made everyone in the Ewing family deal with the notion that their long lost Daddy might be alive and back to reclaim his company, which was now owned by Bobby, and his wife, who was now married to the likeable Clayton Farlow (Howard Keel). 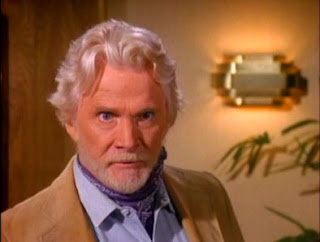 Forrest was excellent at conveying the same qualities of toughness and tenderness that Jim Davis instilled in Jock so that the audience was never really sure throughout this storyline whether Wes Parmalee was genuine or a manipulative phony.  As it turned out in the end, Parmalee was simply a man who was on that fateful chopper that went down into the swamp and who, evidently, Jock had spent time with in the days leading up to the crash, nursing a fever where he talked aloud about his life so that Parmalee, after losing his memory and recovering from the accident, apparently believed he really was Jock after all.  What I liked about Forrest's performance was how Wes Parmalee grew to genuinely love and care for Miss Ellie that he realized he was tearing her life apart.  Parmalee ultimately leaves town forever before his presence could inflict more damage upon Miss Ellie and the Ewings.  Parmalee may have unintentionally been a fake, but Forrest's nobility was as genuine as ever. 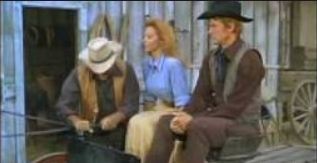 I also remember him for a 1967 "Bonanza" episode entitled "Desperate Passage" where he and Tina Louise are survivors of an Indian attack on a small town named Coulter Corner.  The Cartwrights find Forrest's character--a man named Josh Tanner--locked in the town jail because he was arrested for shooting Billy Coulter, the treacherous son of the richest man in town.  The Cartwright's take Josh Tanner into custody and bring Tina Louise's character--named Mary Burns--along as they make their way across treacherous territory back to Virginia City.  We learn in the course of the episode that Josh Tanner and Mary Burns were having an affair when Billy Coulter burst into Mary's hotel room in order to attack her.  Josh shot Coulter in self-defense, but Josh made Mary promise never to admit she was in that room with him because she is a married woman.  Josh did not want her reputation ruined by having it become publicly known that she was cheating on her husband by having an affair with him. 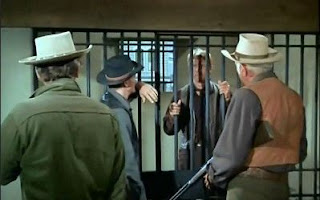 When Mary is kidnapped by the Indian tribe who had earlier attacked Coulter Corner, Josh and the Cartwrights stage a daring rescue in order to free Mary and escape to Virginia City.  After they arrive, Mary insists on telling the authorities in Virginia City the truth so that Josh can be freed, but he refuses to allow her to ruin her reputation in order to save him.  He tells her that he couldn't bear thinking of how an intolerant society would treat Mary once they learn publicly of her adultery.  In the end, Josh is exonerated of Billy Coulter's death without Mary having to confess to their affair, but they are separated forever when she's reunited with her husband.  As Mary says goodbye to Josh, he remains stoic in order not to reveal his true feelings for Mary in front of her husband.  Forrest was very touching and admirable playing a man who loved a woman so much that he was willing to go to the gallows in order to protect her reputation.  He infused Josh Tanner with traits of courage, character, and integrity so that we admired his strength and resolve and he never came across as a dumb sap (like other actors could have done with the character).  The episode ends on a haunting note, as you wonder what will become of Josh and Mary and the sincere performances of Steve Forrest and Tina Louise went a long way to establish this level of interest with the audience. 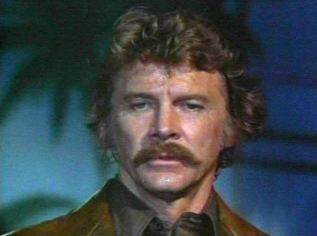 But I don't want to imply that Forrest was a one-note actor only good at playing romantic and noble characters.  He was also incredibly good at playing characters possessing less-than-humble qualities.  I remember him from a 1970 episode of "Gunsmoke" where he played a vain outlaw named Cole Morgan who comes into town with his minions and holds all of Dodge City hostage as they await Marshall Dillon (James Arness) returning to town helping to escort a U.S. Cavalry shipment of gold.  Morgan intends to attack Dillon and the Cavalry with the help of his Gatling Gun.  However, Miss Kitty (Amanda Blake) evokes Morgan's ire when she attacks and scars him in an effort to undermine and avert his scheme.  The enraged Morgan swears vengeance on Miss Kitty for marring his handsome visage and Forrest did an excellent job at conveying Morgan's narcissism, vanity, cruelty and ruthlessness.  It was an exciting, Miss Kitty-themed episode of "Gunsmoke" that allowed Blake and Forrest to have suspenseful and riveting adversarial chemistry together. 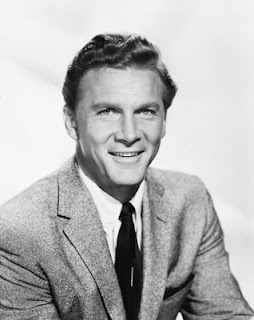 Steve Forrest was an underrated, but superb, actor who never hit the highest echelons of stardom but who became something even greater.  He become a welcome, versatile character actor in films and television who always landed good roles, never stopped working, and was always a pleasure to watch.  For instance, he held his own opposite Faye Dunaway's Joan Crawford in "Mommie Dearest" (1981), playing Crawford's lover and attorney (probably based on the famous Hollywood lawyer Greg Bautzer).  Forrest's character is one of the few people in the film who has the courage to tell it like it is to Dunaway's Crawford, a quality which ensures that he won't be staying around long in her life, and in the movie itself, but which helps evoke the audience's respect and admiration.  He also did a good job parodying his heroic stoicism in the spoof "Amazon Women on the Moon" (1987), displaying a knowing, lighter quality that was unique compared with the rest of his career.  I'm very saddened at hearing of his death, as he was such a ubiquitous presence in films and television while I was growing up, and I've only scratched the surface in describing Steve Forrest's incredibly varied and accomplished career with this little tribute.  However, I believe that Steve Forrest left behind a large body of work as an actor that ensures he will never be forgotten and will live forever for future generations to discover him.
Copyright and Posted by Hill Place at 8:32 PM