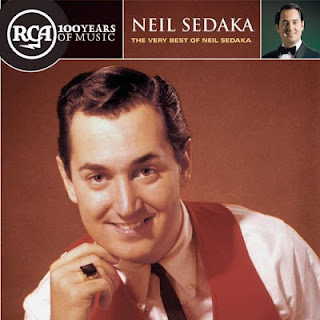 Neil Sedaka is a recording artist I used to take for granted, but whom I have grown to deeply appreciate in recent years as I began to realize the full extent of his talents and accomplishments.  He is a great singer and entertainer but is also an amazing composer and pianist.  Sedaka has a level-headed maturity that allowed him to survive the ups and downs of his long show business career, but also possesses a refreshing child-like innocence and sense of awe about the world that allows him to continue composing and performing songs that have great depth and resonance to them.  I am in awe of the longevity and diversity of his music career.  Of the songs he recorded, I think "Laughter in the Rain" is probably his masterpiece, but there are many, many songs he either wrote or recorded that also deserve praise.  For instance, I really like the songs that he and Howard Greenfield wrote for the 1960 movie "Where the Boys Are," both the title song and the lesser known "Turn on the Sunshine" that Connie Francis sings in the nightclub.  The lyrics to both songs are not only fun and catchy, but they also have genuine feeling and emotion attached to them as well.  Sedaka himself comes across as a level-headed, accessible human being in his interviews, and I am happy to see that he is still recording, still performing, and doesn't seem anywhere close to retiring. 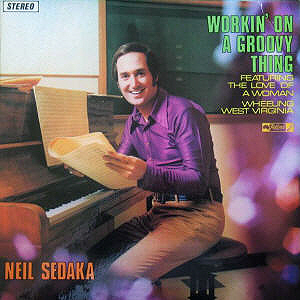 A Neil Sedaka song that I became familiar with just recently was his 1970 recording "Wheeling West Virginia" that he co-wrote with his frequent and longtime collaborator Howard Greenfield.  As I listened to the song, its lyrics resonated with me on many levels.  Even though the song was a hit in Australia at the time of its release, it doesn't appear to be as famous of some of Sedaka's other hits.  However, I think the song's central story of a successful Hollywood movie star originally from Wheeling, West Virginia who complains about the pressures and demands and hectic work schedule that his career entails, and how it evokes introspective self-reflection as to whether he is still in-touch with the person he once was back in his hometown, is one that is relevant and applicable to any and all individuals who are working in demanding, high-profile, and stressful careers.  The themes and concerns associated with the song are as relevant to, say, Washington, DC attorneys and politicos as much as it does with Hollywood actors and entertainers.  As with the works of all great artists, Sedaka's song resonates deeply beyond just the surface level. 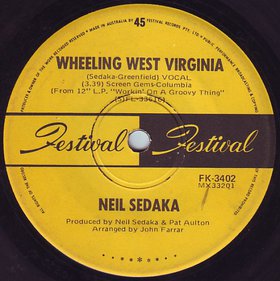 For the uninitiated, the lyrics for "Wheeling, West Virginia" go like this:

Laurel to Sunset, freeway to Culver,
Racin' my MG down to MGM.
Sittin' in make-up tryin' to wake up
Gotta be on the set at eight a.m.
For one more day of make believin',
One more day of playin' the star,
One more day of endless pretendin',
Do ya know who you are?

Lawyers' fees and agents' commission,
Everybody's waitin' to be fed.
Uncle Sam is right there beside you,
Come on boy, ya got to make the bread.
For one more day of make believin',
One more day of playin' the star,
One more day of endless pretendin',
Do ya know who you are? 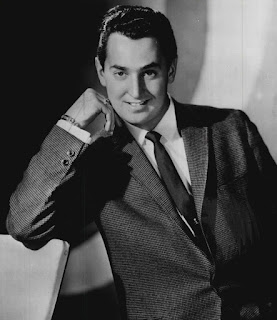 Years ago, before I moved to DC for law school, I was working on a book interviewing actresses who worked in movies and television during the 1960s.  They often described to me what it was like to work in the last decade of the traditional Hollywood studio system, and how they sometimes had doubts as to whether this life that they had suddenly found themselves living was the life they were destined to lead.  I was reminded of them as I listened to Neil Sedaka's song "Wheeling West Virginia."  The energy, excitement, hustle and bustle of Los Angeles and Hollywood of the late 1960s/early 1970s comes vividly to life with the thrilling imagery of Sedaka and Greenfield's lyrics.  With a satirical sense of humor, they peel back the glamorous facade of show business to reveal the mundane realities of successful actors who still have to drive themselves to work everyday, film all day at the studio from morning till night, and then drive home and go to bed early to prepare for the next day of shooting without any kind of personal life, and still have to earn enough money to employ agents and managers and to pay their taxes, all the while wondering if they have lost touch with who they used to be before they achieved this level of success. 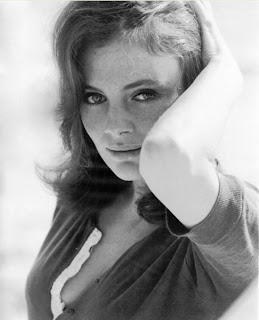 The song reminded me of an anecdote that Jacqueline Bisset, who was one of the actresses I interviewed, shared with me when I spoke with her.  With self-effacing candor and humor, Bisset recalled how she moved to Hollywood in 1967 after she signed a picture deal with 20th Century-Fox and that she worried for many years that she might end up "going Hollywood" and losing all the values that her parents, who she deeply respected, had raised her with.  She said she used to wonder how it would happen with other actors that they changed drastically and negatively once they arrived in Hollywood.  She used to ask herself whether she had the strength of character to be able to live and work in Hollywood, and not pick up any bad traits from the environment, and have enough perspective to go back home to England if her career did not work out and earn a living at a regular job back there.  For years, she used to ask herself if she had "gone Hollywood" yet.  She often concluded that didn't believe that she had, but sensed that it could still happen, so she was always on guard about it in order to ensure that she held onto her sense of identity.  She acknowledged that she finally allowed herself to relax about it around the time she turned 50 years old because she figured she had been in Hollywood nearly 30 years by then, and that if she was going to "go Hollywood" it would have already happened by that point. 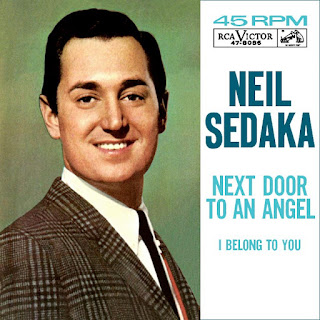 It's too bad that the central character in Sedaka's song "Wheeling West Virginia" never met Jacqueline Bisset and got pointers from her on how to maintain a strong sense of identity about oneself, because it sounds like he went through the same kind of introspection as did Bisset in real life but without going about it in a constructive and proactive way like she did.  Instead of setting standards and goals for himself in terms of what sort of individual he wanted to be in Hollywood, like Bisset did, the protagonist in "Wheeling West Virginia" comes across as an individual who got swept up in success so quickly that he never asked himself what it was he truly wanted out of being a movie star.  Was it the fame and prestige?  Was it financial success?  Was it artistic accomplishment?  We don't know because it's clear that he doesn't know either.  At one point, the lyrics say "For one more day of make believin'/One more day of playin' the star/One more day of endless pretendin'/Do ya know who you are?" which suggests that the central character in the song doesn't really enjoy acting as a craft in terms of exploring the different sides and nuances of a character, which is why he seems unable to find any sort of satisfaction or fulfillment in his work.  It's apparent from the song that being an actor is only helping to create a sense of self-doubt as to his real identity. 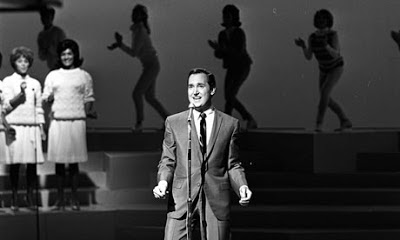 "Wheeling West Virginia" has a deceptively whimsical and joyous beat to it thanks to the exuberance of Sedaka's performance.  But underneath it all, Sedaka also projects a wistful and melancholy mood as the central character in the song begins to idealize, and become nostalgic, about his hometown of Wheeling, West Virginia and how much simpler his life seemed back then.  When I listen to the song, I sense a character who regrets taking his hometown roots for granted, and how that lack of grounding and of being out-of-touch with his origins has led to him become someone who is rootless and dissatisfied with his success in Hollywood.  Clearly this fictional character was not reflective of Neil Sedaka himself as he has often discussed his childhood growing up in Brooklyn and how his parents worked hard to buy a piano and pay for music lessons so he could refine his talents.  One reason I've always liked Sedaka is that he knows who he is and how his family and background played an incredibly important role in helping to shape his success.  It's this sense of grounding and of understanding the importance of his origins that allowed Sedaka to have the perspective and initiative that helped him to forge the career and accomplishments that he has richly earned. 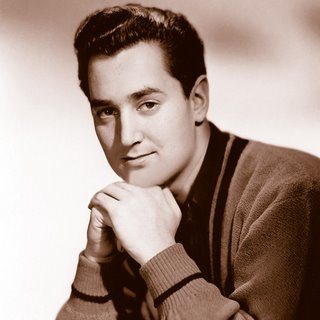 I imagine that "Wheeling West Virginia" was probably Sedaka's bemused, yet compassionate, observation of what other successful actors and entertainers he encountered during his career up to that point was experiencing in their lives (similar to what Jacqueline Bisset observed about her peers and environment once she arrived in Hollywood in 1967).  I'm sure Neil Sedaka never thought in his life that he would ever be compared with Jacqueline Bisset but I think the comparison has validity because, in my dealings with her, I found Bisset to be a realist and I sense that Sedaka is one as well.  At the end of the song "Wheeling West Virginia," the lyrics of the song say "Gone is the guy from Wheelin' West Virginia/Gone is the world he used to know/There's no place as Wheelin' West Virginia/It Faded Long Ago."  In the finale verse, "There's no such place as Wheelin' West Virginia/It Faded Long Ago," Sedaka slows the tempo of the song and brings it to an abrupt halt, almost as if the main character of the song has come to a sudden, painful epiphany that this idealized romanticization of his home town is just an illusion and that Wheeling West Virginia itself probably had its share of responsibilities, pressures and stress just like Hollywood does.  It's because of subtle and insightful nuances such as these, which is characteristic of all of Neil Sedaka's work as a singer and composer throughout his incredible 55-plus year career, that his music continues to resonate with us.
Copyright and Posted by Hill Place at 6:28 PM

Email ThisBlogThis!Share to TwitterShare to FacebookShare to Pinterest
Labels: Howard Greenfield, Jacqueline Bisset, Neil Sedaka, Turn on the Sunshine, Wheeling West Virginia, Where the Boys Are