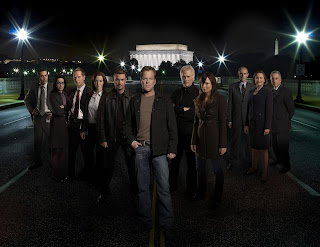 I've never taken the Emmy Awards seriously because they nominate the same people year-after-year and always reward the sort of socially relevant or redeeming programming that doesn't really reflect the best television has to offer.  I think this has something to do with the fact that Emmy voters, in a weird way, still appear to feel that their awards aren't as significant as the Tonys or the Oscars and, as such, feel that they must vote for do-gooder type of programming that they believe will help raise the prestige of their awards.  That's why, throughout the 1980s for instance, issue-oriented shows like "Hill Street Blues" or "L.A. Law" kept being nominated for, and winning, Emmys, while shows like "Dallas" were never in the running because it was considered a lowly prime time soap, even though "Dallas" in the long run proved its relevance with the way it still has a huge mainstream following decades later, reflected in healthy DVD sales, that warranted TNT reviving the show.  (You don't see "Hill Street Blues" or "L.A. Law" being widely discussed anymore, much less rerun anywhere, because I believe people don't care about them at all.)  As such, Emmy often gets it wrong in terms of who was deserving of being nominated and/or winning. 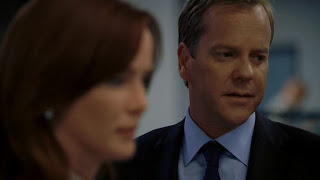 A good example of this occurred a few years ago during the 7th Season of the overrated "24" television series.  I used to be a big fan of "24" when it was on the air.  But, now that it is gone, I find that I have no interest in revisiting the series on DVD (except for the sublime Season 2 with the controversial Kate Warner character) because I realize the extent it was a purely plot-driven show, with no sense of consistency, logic, or respect for its characters.  When "24" began, it was an ensemble show with a fascinating core cast of characters.  However, over time, as the series began killing off its cast members, the only major character that remained throughout it all was Kiefer Sutherland's increasingly tiresome Jack Bauer character.  His "the-weight-of-the-world-is-on-my-shoulders" act grew really old, as did his extended 3-season relationship with the bland Kim Raver as the narcissistic and pathetic Audrey Raines.  "24" got pretty pretentious after awhile and took itself way too seriously.  But what really bothered me was the sense that the producers made the show up week-to-week without any real game plan in place as to the direction the stories were going.  This was reflected in the fact that characters would change on a dime from being good-to-bad, or vice versa, just to shock the viewers in a cheap way, and without any logic behind it. 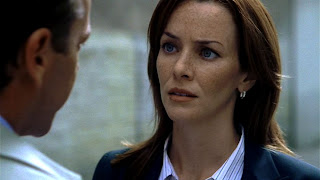 However, in Season 7, after they got rid of Kim Raver's Audrey Raines once and for all, the show introduced a fascinating new leading lady to the series, the underrated Annie Wersching as FBI Agent Renee Walker.  The character starts out as a no-nonsense, by-the-book kind of individual who slowly, over the course of spending the day working with Jack Bauer to avert a terrorist threat upon Washington, DC, finds herself resorting to the sort of unorthodox tactics and interrogation methods that Bauer employs to get the information she needs.  Walker's moral dilemma made for compelling and exciting television.  Throughout the course of Season 7, she tortures a suspect recuperating in the hospital; holds a villain's wife and child hostage and appears to threaten to kill the child in order to make the villain reveal information; allows an innocent female civilian to undertake a dangerous mission so that Jack and Walker can pinpoint the location of one of the villains, which results in the death of that civilian; and ends the season torturing the mastermind behind the day's events in an effort to get to the bottom of who else is also involved. 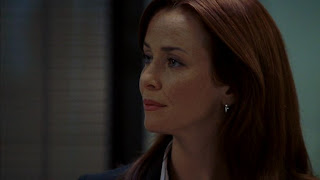 For the first time since Sarah Wynter's Kate Warner in Season 2, Jack Bauer was paired with a leading lady who was out in the field with him risking her life to solve the day's crisis.  Wersching and Kiefer Sutherland had effortless chemistry that season which made you wonder why the producers kept harping on Kim Raver as being the only worthwhile love interest for Jack throughout Seasons 4 thru 6.  Walker was an interesting character because, throughout the season, Annie Wersching allowed you to see the emotional conflict and turmoil the character was experiencing between following proper procedures and protocol, and thinking outside the box in order to help save lives.  It was exciting to see how Walker wrestled with her evolving ruthless determination to do everything within her means, even to the extent of sacrificing her morality and viewing innocent individuals as expendable collateral damage, to avert the threat facing Washington, DC.  If Walker made any mistake, it was that she chose to torture arch villain Alan Wilson (Will Patton) at the end of the season after the crisis had been resolved when there was no impending threat to be averted.  There was no way for Walker to justify her torture of Wilson under those circumstances and her actions at the end of the season led to the character's gradual downfall leading into her grim fate in Season 8.  It was an unusually well-written and well thought-out character for "24" and Wersching was magnificent in it because she brought a subtle, low-key quality to Walker that continually underscored the character's intelligence and humanity. 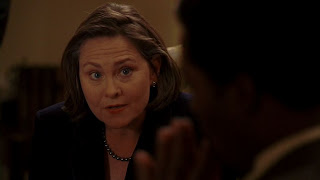 A character and performance like this deserved Emmy consideration, but Wersching was strangely short-shrifted later that year when the nominations came out.  What was odd about it is that her co-star, Broadway actress Cherry Jones playing President Allison Taylor, was nominated for an Emmy in the Best Supporting Actress category, and won.  Throughout Season 7, I found the President Taylor character, and Cherry Jones' portrayal of her, largely flat and uninvolving.  The character often came off as a sanctimonious school marm, perpetually scolding all the other characters that they needed to behave nicely, and she just didn't seem credible as someone who is supposed to be the leader of the free world.  I thought Jones was really bland in the role.  I now recognize that this had more to do with the writers not giving Cherry Jones interesting enough material that season, because it was during the following season 8 when President Taylor suddenly turns ruthless in her determination to cover up Russian involvement with assassinating a Middle East leader (which would prevent the signing of a treaty that she has worked hard to negotiate) that I realized just how great an actress Jones truly is.  President Taylor suddenly had weaknesses and interesting nuances as an individual for Jones to explore, as opposed to playing an idealized archetype as she did in Season 7.  I had short-sightedly short-shrifted Jones during Season 7 as a stage actress whose talent didn't translate well on television, but during Season 8 I realized that Jones' Broadway credentials had genuine merit. 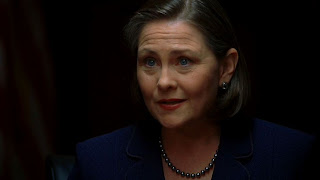 However, Cherry Jones wasn't nominated and didn't win for her superior work in Season 8, because she asked not to be considered since she apparently felt it was wrong to be in the running for a role she had already won for the year before.  I thought that showed a lot of professional integrity on her part, in order to open up the field of candidates who could be considered, but it seemed unfortunate that she won for the season she didn't deserve to win, and didn't win for the season that she should have.  I still believe Cherry Jones won for Season 7 because Emmy voters are always dazzled by actors with a Broadway, or feature film, pedigree.  Having hung around a few television actors in my lifetime, I always get the impression that they feel they are somehow "slumming" by working in the medium, and that only in "thee-uh-tah" can you do any sort of "real acting."  (I'm always saddened that these people can't recognize and appreciate the wonderful work they do in television.)  As such, because of what I perceive to be this sense of professional envy for Broadway actors, whenever someone from the stage does something on television, it seems like they are nominated for Emmys up the wazoo even if the actual performance wasn't all that interesting or notable.  A good example of this was the time when Ellen Burstyn was nominated for a Best Supporting Actress Emmy for a 14 second performance in the HBO TV movie "Mrs. Harris" (2005), a controversial incident which led people to assume that Emmy voters didn't actually see her performance, and only nominated her by virtue of her name value as an acclaimed actress of stage and screen. 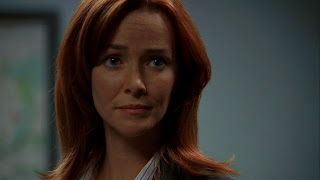 No disrespect intended to Cherry Jones (because she is a superb actress who deserved to win for Season 8) but I sincerely believe that her Emmy for "24" was due more to her Broadway pedigree than anything she actually did in Season 7 playing President Taylor.  Ms. Jones' work that season was competent and professional, but she was continually eclipsed each week by the subtle, superb work of Annie Wersching as morally conflicted FBI Agent Renee Walker.  Week-after-week, Wersching created a character who I was curious to see what was going to happen with next.  The places that the writers, and Wersching, took Walker throughout Season 7 was nothing less than breathtaking.  I have no doubt that, if Wersching had come to "24" with extensive Broadway credentials (rather than a year-long stint on "General Hospital"), she would have been rewarded with the Emmy nomination she richly deserved.  Since then, Wersching has had a prolific career guest-starring on "NCIS," "CSI," "Hawaii Five-0," and "Dallas," as well as the Lifetime TV movie "The Surrogate" (2013).  She continues to do good work on these shows, but deserves better roles.  One reason I wish Wersching had been nominated for an Emmy that season is because I feel it would have brought more luster to her career and given her even better career opportunities once her tenure on "24" ended.  Annie Wersching remains an underrated actress who deserves another shot at a good regular role on a hit weekly series that hopefully will be as interesting and challenging as when she played FBI Agent Renee Walker on "24."
Copyright and Posted by Hill Place at 6:43 AM