A Morally Reprehensible "Tower" of Evil 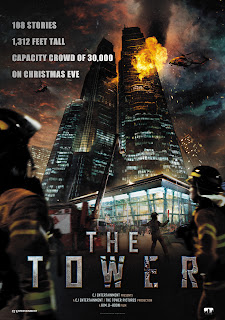 I saw a movie recently that troubled me deeply and felt compelled to write about it.  It was a brand new disaster epic from South Korea called "The Tower/타워" (2012).  My understanding is that it has shaped up to be a financial success internationally and has even played a few engagements in theaters across the United States.  (It will be released in the U.S. on Blu-Ray and DVD through Inception Media Group on July 2nd.)  The storyline of "The Tower" involves a Christmas Eve celebration taking place at a brand new, luxury skyscraper comprising two identical twin towers that rise 108 stories into the sky in a major South Korean city.  Festivities are in full swing as two helicopters, hired by the owner of the building, spray snow upon the building to heighten the illusion of wintertime.  However, disaster strikes when both helicopters go out of control and crash into the buildings, starting a fast-moving fire that threatens the lives of not only the individuals trapped in the building, but of the surrounding area as well as the structure starts to collapse and implode under the weight of the damage it has sustained.  Who will survive this tragedy?

I was initially very impressed with the precision and scale of "The Tower" and of how well-acted and well-made it was.  I definitely got a clear idea of how an Irwin Allen-type disaster movie might look like today given the advancements in technology since he made "The Poseidon Adventure" (1972) and "The Towering Inferno" (1974).  The movie, on a superficial level, was admittedly suspenseful, exciting and very involving, even though the characterizations were, for the most part, skin-deep and made the individuals in Irwin Allen's movies, particularly "The Poseidon Adventure," appear deep and insightful in-comparison.  Among the cast members, veteran Korean actors Song Jae Ho and Lee Joo Shil are very touching as a doomed elderly couple celebrating Christmas together, Cha In-Pyo has tremendous screen presence as the ruthless and powerful owner of the building (and richly deserves an opportunity to work in Hollywood), and Jeon Guk-hyang was sympathetic as a middle-aged maintenance woman working on Christmas Eve and fighting to survive so that she can see her son again.

Probably my favorite character was Min Young as a young pregnant woman who proves to be surprisingly heroic and resilient under the circumstances.  There is a sequence in the movie where everyone is running for their lives and Min Young's character walks by a scenic elevator and hears a young couple trapped inside and screaming for someone to come and help free them.  She stops, listens, and keeps going.  At first, you assume that she's only concerned for herself and is going to leave them there to die.  Then, minutes later, Min Young unexpectedly returns to the elevator after she has found a sharp spear-like metallic object that she can use to pry the elevator door open so she can save the hapless young couple.  After that, because you don't expect a character in her delicate condition to be concerned for anyone but herself and her unborn child, I was rooting for her to survive because I felt that she had earned it.

However, as it progressed, I started feeling uncomfortable and queasy as the scenes of destruction started to remind me too much of what we all saw on the TV news at New York's World Trade Center on September 11, 2001.  Not only does the disaster in "The Tower" take place at a structure comprised of identical twin skyscrapers, but the catastrophe is caused by two aircraft that had, moments earlier, been circling the towers before they each crash into the structures and burst into flames.  As a result, we are treated to images of hundreds of people running for their lives (including a disturbing image of one young woman screaming in agony and horror and bleeding profusely from the falling glass that has sliced open her scalp); people falling out of windows and plummeting to their deaths a hundred stories below; sequences demonstrating how both structures are threatening to collapse under the weight of the damage they have sustained; scenes suggesting that survivors of the fire might be buried alive as authorities decide whether to detonate explosives to implode the building under controlled circumstances, so that it doesn't cause widespread damage throughout neighboring buildings; sequences showing family members putting up fliers and photographs of their missing loved ones on bulletin boards in the hope that they may be found; and (worst of all) images of people trapped in an enclosed space, screaming for help, being burned alive.  There's a sequence involving a dozen people who are trying to escape the building through an elevator and being trapped on a level where the fire is raging, unable to escape, and are graphically shown being burned to death.  It was at that point that "The Tower" stopped being entertaining.

I'm not a prude or uptight in the least and I do feel that sometimes the public or the media becomes overly sensitive when tragic events occur in the news and cause studios to pull movies from their release schedule (or cause networks to preempt a TV show) because a sequence in that otherwise unrelated film or TV show happens to coincide with a sliver of elements that are unintentionally similar to the events that occurred in that real-life tragedy.  A sliver of elements is one thing, but "The Tower" contains sequence-after-sequence of death and destruction that bear more than a passing resemblance to the events of 9/11.  It's as if the filmmakers played back news footage from that day and wrote the script by emulating as much as they could from those tragic, unforgettable images.  If "The Tower" only contained one or two such elements, it probably would not have bothered me but, as I just outlined to you, there are far too many scenes that appear to be intentionally reminiscent of 9/11 to allow the movie's morally questionable choices (such as the inclusion of slapstick humor and comedy sequences amidst the death and destruction in an effort to break the "tension") as well as general all-around tastelessness (including a musical sequence that has to be seen to be believed involving a light-hearted pop/rap song that's at odds with the death and mutilation that follows and is just as bad as music by the American artists it tries to emulate) for it to go unnoticed.

One could opine that "The Tower" is just a modern-day version of "The Towering Inferno," but when Irwin Allen made that movie in 1974, there was no current event similar to the central premise depicted in that movie for the audience to have an uncomfortable frame of reference.  In addition, Irwin Allen demonstrated a comparative level of restraint by not showing the death and carnage up close as it is depicted in "The Tower."  This was one of the most blood-thirsty commercial films I have seen in a long time, with people suffering and dying spectacularly gruesome deaths with little in the way of compassion, sensitivity or perspective to justify it all.  (The cruel and callous deaths devised for that nice elderly couple in the movie was particularly upsetting to watch.)  I think what bothered me was that I sensed the elements in "The Tower" that reminded me of 9/11 were not merely coincidental, but were included specifically to evoke one's memories of that event.  Unlike Paul Greengrass' "United 93" (2006) or Oliver Stone's "World Trade Center" (2006), which tried to put the events of 9/11 into context, I think director Ji-hoon Kim was consciously and intentionally exploiting imagery reminiscent of 9/11 with no constructive purpose in mind other than pure sensationalism.  He should be deeply ashamed of himself.  At the risk of overstating it, in my opinion, "The Tower" is one of the ugliest, most evil, most morally reprehensible films passing as escapist entertainment that I have seen in quite some time.  Because real people died in almost precisely the same manner as the characters depicted in this movie, it's hard to have enough of an objective perspective to enjoy this movie.  I grew up in the 1970s and love my disaster movies, just not when they exploit and prey on the hurt and suffering of others.
Copyright and Posted by Hill Place at 3:20 AM