Giving Joey Heatherton Her Due as a Musical Entertainer 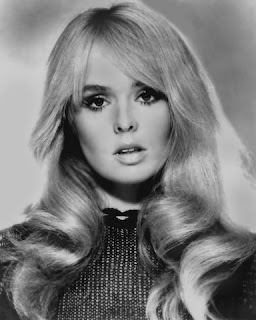 It is the consequence of getting older that one finds that their tastes change and that they no longer enjoy the things they once did when they were younger.  Ann-Margret is one such example in my case.  When I was younger, I thought Ann-Margret was dazzling, exciting and talented.  She seemed to have it all: looks, acting ability, as well as dancing and vocal talent.  But, as I've gotten older, I now realize that Ann-Margret, while still a good actress and dancer, was a very mediocre singer.  Check out some of her recordings on YouTube and you'll find that she had a very weak voice with little range to it.  It's amazing she had as many LP albums as she did during the 1960s, because she rarely nailed any of the songs she recorded.  Her singing voice had a distinct vibrato that prevented her from really getting to the heart of a song.  It's only when she was dancing on-screen in accompaniment with the songs that she really lit up.  On their own, Ann-Margret's recordings don't hold up at all as legitimate works of music and only go to demonstrate that her talents had limits.  Even though she remained a talented dancer, she also always had strange, quirky ticks where she would add a step or a gesture or a weird facial expression that was meant to be provocative, but now just seems tacky.  Because she appeared to be trying too hard to please the audience by being as sexy and provocative as she could be, Ann-Margret had the opposite effect at times of coming across as little more than an overly enthusiastic high school cheerleader.  She did not seem to have the instinct or restraint as an entertainer to know when not to over-indulge her worst mannerisms. 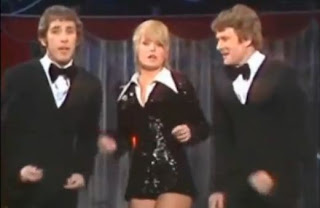 When I was younger and thought Ann-Margret was great, I used to dismiss Joey Heatherton as a "poor-man's Ann-Margret."  This had to do with the fact that Heatherton never really had a distinguished acting career, and mostly made her name on TV variety shows in the 1960s and 1970s.  Since I had not seen her in those TV variety shows, I dismissed her without really giving her a chance.  Thanks to YouTube, however, with generous people posting clips of Heatherton's appearances on various variety shows throughout the 1960s and 1970s, I now understand her innate appeal as an entertainer.  In short, Joey Heathrton was a dazzling entertainer.  She was every bit as good and accomplished a dancer as Ann-Margret, but she seemed to have better instincts with regards to what moves, gestures and steps she chose to incorporate in her performances.  And even though I never cared for her famous short haircut in the late 1960s/early 1970s, she seemed less made-up than Ann-Margret was in terms of her style and fashion choices.  All of these aspects combine to make Heatherton's work as an entertainer more effective and impressive than Ann-Margret's when you compare their musical and variety show performances side-by-side on YouTube. 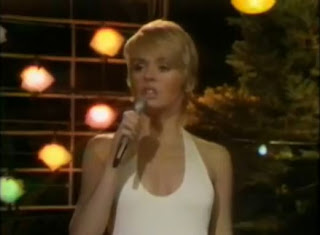 But what really sets Joey Heatherton apart as a performer compared to Ann-Margret is the fact that Heatherton was a very good singer who could belt out an emotional tune with the best of them.  No doubt there is indeed a campy and kitschy quality to Heatherton, but there's also genuine talent on display as well.  With Ann-Margret's singing, there's always an adequate, sex-kittenish quality she brings to every song, but rarely were you ever moved by her vocal performances.  Her pleasant, but bland, cover of Henry Mancini's classic "Moon River" perfectly exemplifies Ann-Margret's musical shortcomings as she never really gets to the crux and soul of that song.  In contrast, Joey Heatherton could belt out a torch song with nuance and emotion that demonstrated her ability to put her heart and soul into a musical number.  In the 1973 ABC-TV variety special titled "Old Faithful," Heatherton gives an excellent performance singing "Someone to Watch Over Me" that is so good, it should silence any naysayers who think of her merely as a camp figure.  Even though her voice has a perfect pitch, it's not the sort of perfect pitch that lacks a human dimension.  Her high notes are awe-inspiring, but it's the low-notes where she really distinguishes herself with this song.  My late father, the Chinese opera musician, once told me that the mark of a great singer is not how they hit the high notes, because he felt they were easier, but how they manage to work through the low-notes of a song without their voice becoming distorted.  Heatherton is able to hit those low notes without her voice breaking or becoming garbled.  She gets to the essence of the song in a powerful, yet unaffected manner, that she earns the standing ovation she receives from the audience at the end of her performance. 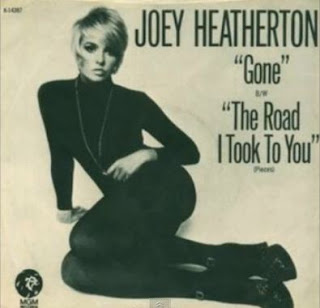 Heatherton also did a memorable cover of Ferlin Husky's country classic "Gone" which became a minor hit single in 1972.  It was released as part of an LP entitled "The Joey Heatherton Album" from MGM Records.  Heatherton effectively re-imagined "Gone" as a power ballad with a horns, brass, and choral arrangement accompanying her that gives the song an almost gospel revival quality.  She conveys the joys and anguish of a once-powerful love that is now no more in a heartfelt, sincere manner.  When she sings "Since you've gone, my heart, my lips, my tear-dimmed eyes, a lonely soul within me cries" she evokes so much pain and sorrow from that simple verse that you feel like you're on a rollercoaster that has just jumped the tracks when you listen to it.  What's great about Heatherton's version of "Gone" is that she brought her own distinctive quality to a famous song without ruining one's memory of the original.  As such, Joey Heatherton's rendition of "Gone" complements, rather than denigrates, Ferlin Husky's original version of the song.  It may be Heatherton's musical masterpiece as an entertainer. 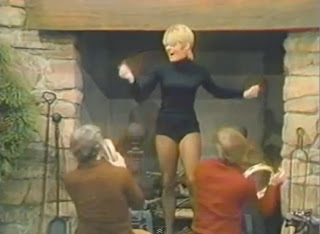 But it's Joey Heatherton's talents as a dancer that people remember her for and probably no number demonstrates how effectively she combined her vocal and dancing abilities than her performance of "The Road I Took To You (Pieces)" in the aforementioned Zero Mostel special.  Clad in a black leotard and high heels, in contrast to the garish costumes and accoutrement that Ann-Margret would wear in her musical performances on variety shows, Heatherton is the personification of simplicity as she performs this rousing and catchy pop song accompanied only by two male dancers wearing casual attire.  The choreography of the number is low-key, yet effective, as Heatherton ends up encompassing most of the set as she performs the song.  Incorporating the nearby props and furniture naturally and unobtrusively, Heatherton slinks around the set in a provocative, sexy manner that might be considered campy by some people, but which never becomes as embarrassingly tacky as it could have been had Ann-Margret performed it.  Heatherton has the confidence to let the song speak for itself without trying to oversell it to the audience.  (If Ann-Margret had performed this song, she would've added weird expressions and gestures, and used the props in a contrived manner, that would have detracted from the overall mood of the song.) 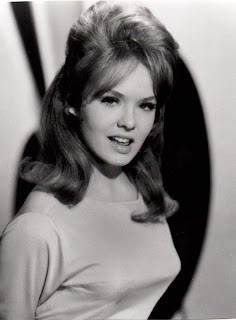 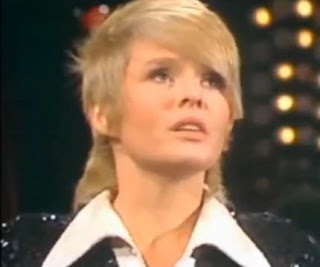 It may sound like I am harshly criticizing Ann-Margret here, but I am simply using her as a point-of-contrast to help highlight qualities in Joey Heatherton that have not been given their due.  No matter what I have discovered about Joey Heatherton's talents as a musical performer, however, the fact remains is that Ann-Margret is still a better actress who has enjoyed a more accomplished acting career than Heatherton.  Unfortunately, Heatherton's movie career never really took off, despite her TV variety show success, and her life has occasionally been plagued with unfortunate scandal.  Heatherton's one meaty film role, opposite Richard Burton, in Edward Dmytryk's bizarre version of "Bluebeard" (1972), received poor reviews.  However, I think her feisty and insolent performance in that movie is better than she is given credit for and demonstrates what her dramatic potential could have been as an actress.  At the very least, Heatherton should have had a more successful career as a recording artist than she did.  She should have worked more often with record producers who could have helped her select good material to release successful albums.  That might have helped her sustain her career as TV variety shows became extinct.  She has since become a virtual recluse in the last few years, a forgotten footnote in the annals of entertainment as her work in TV variety shows has not been well-remembered by later generations.  It's a shame because Joey Heatherton has genuine sex appeal, immense talent as a musical entertainer, and an appealing and natural screen presence.  Surely there has to be a second (or even third or fourth) act in store for this dynamic and talented entertainer.
Copyright and Posted by Hill Place at 1:33 PM

Email ThisBlogThis!Share to TwitterShare to FacebookShare to Pinterest
Labels: Ann-Margret, Bluebeard, Gone, Joey Heatherton, Someone to Watch Over Me, The Joey Heatherton Album, The Road I Took To You (Pieces)