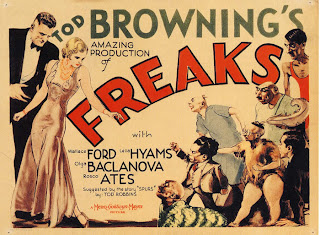 Tod Browning's "Freaks" (1932) is often characterized as a horror film, but I have never really thought of it as such.  I think of it more as a tragic melodrama than a film depicting out-and-out horror.  To characterize it as such would be giving short shrift to the circus personnel depicted in the film who were born with physical deformities.  Browning goes to great lengths to dramatize a diverse group of people, who possess separate and distinct personalities, with such warmth and compassion that there is nothing in the film that should be considered truly horrifying from the traditional perspective.  One of the most daring films ever to come out of the classic Hollywood studio system, "Freaks" is better characterized as a parable about the moral corruption of specific individuals who are out to exploit those they perceive to be weak, and about underestimating the strength and resolve of those allegedly weak people who are forced to live on the fringes of society because of the lack of compassion and acceptance of them.  What I like so much about the movie is the fact that Browning doesn't romanticize the physically deformed circus personnel who form the backbone of "Freaks."  Rather than portraying them as individuals with an unrealistically higher moral compass and perspective who "turn the other cheek" whenever they are put-upon, Browning portrays them as people who are capable of the same sense of righteous justice and vengeance as the rest of society.  Browning doesn't condescend to them by implying they are somehow more humble and superior to the other characters.  He doesn't look at them with a sense of false nobility the way other filmmakers might have.  As such, they are no better or worse than everybody else, but ultimately prove that they have the same hopes, dreams, desires, flaws, and capability for rage and anger as everyone else. 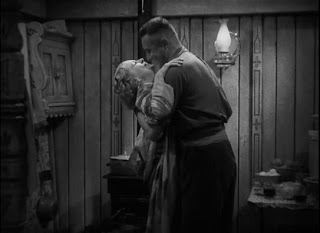 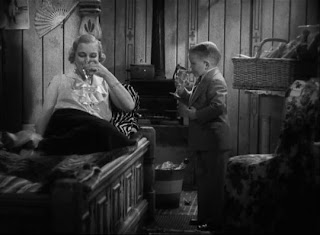 "Freaks" tells the story of the denizens who are employed by Madame Tetrallini's (Rose Dione) traveling circus and carnival.  The conniving and insincere circus high-wire performer, Cleopatra (Olga Baclanova) has been flirting with Hans (Harry Earles), one of the little people performing in the circus.  This dismays Hans' sweet fiancee, Frieda (Daisy Earles) who is also Hans' size and who feels threatened by Cleopatra's interest in her boyfriend.  When Frieda inadvertently spills the beans to Cleopatra about Hans' sizable inheritance, Cleopatra conspires with her lover, the brutish, hunky circus muscleman Hercules (Henry Victor) to manipulate Hans into marrying Cleopatra and poison him for his money.  As Hans grows weaker and weaker due to being poisoned, circus seal trainer Venus (Leila Hyams) confronts Hercules with her suspicions about what he and Cleopatra are doing to Hans.  Venus warns Hercules to leave Hans alone, or she'll go straight to the authorities.  On the night of a freak thunderstorm, Hans and his fellow circus friends confront Cleopatra with their knowledge of her nefarious deeds.  Hercules attempts to do away with Venus, but she is rescued by good-guy circus clown Phroso (Wallace Ford), as the rest of the physically deformed circus performers close in on Hercules and do away with him.  Cleopatra runs screaming through the forest during the rainstorm, pursued by the rest of the circus personnel.  The movie ends some time later, with Cleopatra now part of the circus sideshow act, as a deformed "duck woman" with no legs and making duck-like sounds.  Meanwhile, Phroso and Venus help reunite Freida with a reclusive Hans. 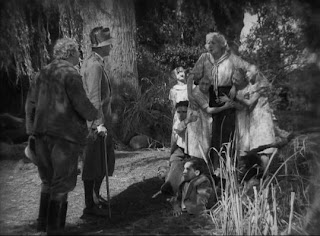 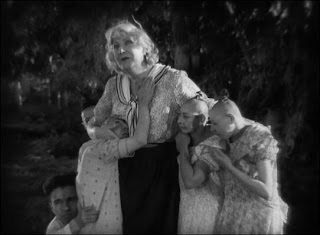 A simplistic reading of "Freaks" would have you believe that all the physically "normal" people of the film are corrupt and evil, while the physically deformed characters are completely pure and flawless individuals.  It's not as simple as that.  It's true that Browning is calling attention to individuals like Cleopatra or Hercules who would exploit, mock, or condescend to people who are different from them, but the movie takes great pains to underscore that they are the exceptions, not the rule, to society.  What's often forgotten is that we see depictions of so-called "normal" people who demonstrate respect and compassion to people who are different from them.  At the outset of the film, there's a sequence where Jean (Michael Visaroff), the ignorant gatekeeper on a private property where the circus personnel are playing, orders them off the premises and insults their physical appearance.  Madame Tetrallini explains to Jean's employer, property owner Monsieur Duval (Albert Conti) that they are simply children who work for her circus.  Jean scoffs, but Duval calms his employee down and tells them they are welcome to remain on his property.  Madame Tetrallini and her personnel thank Duval for being a gentleman and showing dignity and respect to them.  As Duval and Jean leave, Madame Tetrallini tellingly scolds her circus performers by saying "Oh, shame, shame, shame!  How many times have I told you not to be frightened?  Have I not told you that God looks after all his children?"  In so doing, Madame Tetrallini demonstrates how she holds the circus performers with physical deformities up to the same standards as everyone else in the world.  Even though she looks out for them, like she would for any human being under her employ, she also wants them to learn how to take care of themselves and her statement demonstrates how she tries not to bestow preferential treatment upon them over anyone else.  Madame Tetrallini demonstrates respect, not pity, for them. 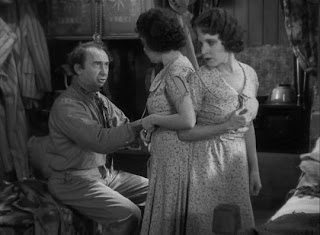 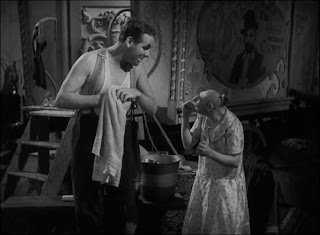 Other major characters in "Freaks" who are often short-shrifted in serious discussions of the film are circus clown Phroso (Wallace Ford), beautiful seal trainer Venus (Leila Hyams) and another clown named Roscoe (Roscoe Ates).  They do not have any physical deformities and yet treat those in the circus who do as equals and genuine friends.  Roscoe is even married to one of the Siamese twins Daisy (Daisy Hilton) and often bickers with Daisy's sister Violet (Violet Hilton) because of what he perceives to be Violet's bad influence upon his wife.  As such Roscoe demonstrates how he doesn't treat the ones with physical deformities differently than anyone else.  Phroso is generally an all-around good guy who is friends with everyone and is concerned for their well-being.  He is genuinely excited and happy when the bearded lady gives birth to a baby, and even fawns over Schlitzie, a circus performer born with microcephaly, by complimenting her on her dress.  Wallace Ford's innate warmth as an actor is put to good use in this touching scene.  Phroso's kindness to Schlitzie elicits a warm reaction from Venus, who appears deeply moved by Phroso's interaction with Schlitzie. 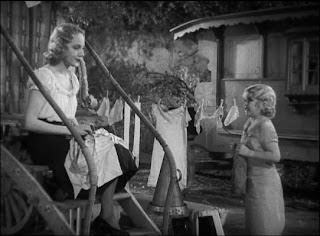 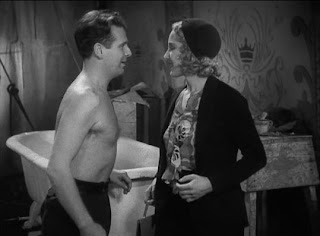 Venus herself proves to be a good confidante for Frieda when she fears Hans is slipping away from her to Cleopatra.  The scene in which Venus provides moral support to Frieda is one of the best in the movie, and demonstrates how Venus and Frieda's romantic issues with Phroso and Hans are given equal weight in the movie.  Venus is also the one who confronts Hercules with her suspicions that he and Cleopatra are plotting to kill Hans for his money.  At the end of the movie, Phroso and Venus help reunite Frieda with Hans and are sensitive enough to let them have time to themselves to work out the issues in their relationship stemming from what happened earlier with Hans' marriage to Cleopatra and its disasterous consequences.  It's appropriate that the kind Phroso and Venus would also end up with each other, as their warmth and compassion for others are a good complement.  In "Freaks," people like Madame Tetrallini, Monsieur Duval, Phroso, Venus and Roscoe join with the circus personnel with physical deformities to represent the status-quo of society.  People like Cleopatra, Hercules, and the groundskeeper Jean, who have no compassion for others different from themselves, are the ones who represent the so-called "Freaks" of society due to their lack of integrity, empathy and caring.  In so doing, Browning does not color the world of the characters in "Freaks" in mere black and white, but in refreshingly complex shades of grey.  I don't think that Browning cynically believed that all of society was intolerant, just a significant minority, and that most individuals have the capacity to care about people different from them.  That's why "Freaks" is the ultimate metaphor of the challenges that a diverse society faces when people of different races, religions, ethnic groups, physical conditions, and sexual orientations try to live in harmony with one another. 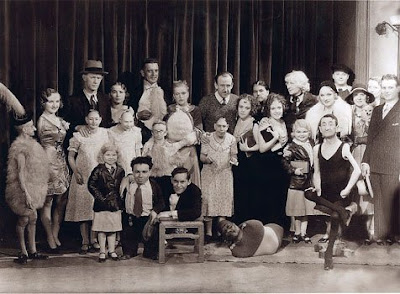 One of the great tragedies of cinema is the fact that MGM cut "Freaks" down from its original 90 minute running time, after disasterous preview screenings where people reacted negatively to it, to its current running time of just over one hour.  The nearly 30 minutes of footage has been lost and horror movie fans have been imagining what the movie would have been like if it had not been significantly altered.  As it turns out, according to a website that synopsizes the original script found in the MGM archives, much of the footage concerned Venus and Phroso's developing relationship; more scenes with Madame Tetrallini; Cleopatra attempting to flirt with Phroso; Venus stumbling onto more evidence concerning Cleopatra and Hercules' murderous plot against Hans; and the original ending of the movie with the revelation that Hercules is still alive and part of Madame Tetrallini's act, singing falsetto after having been castrated by the circus performers.  It's a shame that this footage was lost because it would have helped to further deepen the already-complex storylines and relationships among the various circus personnel even more than what is depicted in the final cut of the film.  Perhaps the lost footage would be disappointing to horror film fans expecting more "horrific" content, but reading about it makes me both sad and excited at how even greater "Freaks" could have been had movie audiences back in 1932 been more receptive to its daring and unique characters and storyline.  In some ways, the intolerance that "Freaks" suffered at the hands of MGM executives and by moviegoers at the time of its original release is an appropriate metaphor for the kind of intolerance that its protagonists faced both on-screen in the movie's storyline, and in real-life.
Copyright and Posted by Hill Place at 3:35 AM