Characters to Root for in "Dressed to Kill" 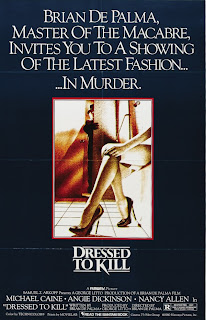 Brian De Palma's work as a director is not often discussed these days, which is surprising considering how revered and important he was during the 1970s and 1980s.  I think this is because many of his films were entertaining exercises in style over substance.  You were often dazzled by his story construction and visual imagery, but rarely were you touched by the characters in his films.  For someone who purported to take after Alfred Hitchcock, De Palma rarely had any genuine insight into his characters the way Hitchcock did.  For De Palma, his characters were often plot devices to move the story along.  This is not meant as a condemnation, because I have enjoyed many of his films, but it does explain why his work is not as revered as Hitchcock or other major directors of his generation.  You are rarely touched by any of his films.  However, there is one De Palma film that I do think rises to the level of deserving greater acclaim and that's 1980's "Dressed to Kill."  I think what distinguishes this film from others is that De Palma seems to actually care about his protagonists for a change.  In "Dressed to Kill," he creates a trio of characters that the audience identifies with, and genuinely cares about, to the degree that their deaths and/or survival in the movie really matters for a change.

As has already been noted, "Dressed to Kill" takes on the structure of Alfred Hitchcock's "Psycho" in that we begin the movie with the story focused on one blonde woman (Janet Leigh in the Hitchcock movie, Angie Dickinson in the De Palma movie) as she throws caution to the wind and embarks on a series of risky endeavors on the last day of her life that indirectly lead to her premature and violent death at the hands of what appears to be a vicious, violent woman in an enclosed, claustrophobic and otherwise ordinary setting (a shower in "Psycho," an elevator in "Dressed to Kill").  At that point, another blonde (Vera Miles in "Psycho," Nancy Allen in "Dressed to Kill") takes over as the new, heretofore unexpected protagonist who collaborates with a man who had a close relationship with the deceased woman (John Gavin, playing Janet Leigh's lover in "Psycho," Keith Gordon, playing Angie Dickinson's computer geek son in "Dressed to Kill") to solve the mystery and nab the killer.  The killer in each movie turns out to be a man suffering from a split personality disorder that causes them to dress as a woman when they commit their violent crimes (Anthony Perkins as Norman Bates in "Psycho," Michael Caine as the repressed psychiatrist in "Dressed to Kill.")  Even though there are some superficial similarities, "Dressed to Kill" has enough intrigue and nuances to it that it is able to stand on its own as a worthy companion piece to "Psycho," instead of another cheap knock off.

One of the reasons I like "Dressed to Kill" is because Angie Dickinson gives one of her best performances as the sexually repressed upper middle-class housewife Kate Miller.  Dickinson courageously opens the movie with both a nude shower scene (a dream sequence) as well as a racy scene in bed where Kate is making love to her husband.  Later, Dickinson has another racy love scene in the back of a taxi cab with a handsome stranger she has encountered in a museum.  Dickinson gives a brave performance throughout these sequences by conveying the loneliness and longing for affection that Kate experiences in her stifling marriage.  Because De Palma directs these love scenes by lingering on Dickinson's expressive face--which convey her feelings of passion, surprise and delight--these scenes do not come across as tasteless or exploitative.  Instead, they come across as a sincere and sensitive expression of a woman's longing for romantic, emotional, and sexual fulfillment.  The normally feisty and bawdy Dickinson suppresses her typically exuberant screen image to create a confused and sympathetic character that the audience feels compassion for.  Kate is a kind and decent person who is clearly a good wife and mother, but is still attractive and vibrant enough to yearn for love and passion in her life.  Dickinson has a good rapport with Keith Gordon, playing Kate's nerdy son Peter.  The scene where Kate and Peter discuss his latest computer invention at home, while arguing over whether he will accompany her to the museum that day, has an authentic sound to it that makes it completely believable that they are mother and son.  Because Dickinson makes a strong impression as to the quality of person Kate is in a short amount of screen time, it is devastating when she is brutally killed in the elevator.

However, Kate's departure from the film allows for the introduction of another fascinating blonde woman in the movie, streetwise high-class prostitute Liz Blake (Nancy Allen).  As individuals, Kate and Liz are polar opposites.  Unlike Kate's sexually repressed comfortable, suburban middle-class housewife existence, Liz makes her living selling her sexuality.  She is completely at ease with that aspect of her life and does not have the insecurities as to her sexual self-worth the way Kate did.  Liz is an ambitious, proactive woman who lives in a classy Manhattan loft, invests money in art and the stock market, and who likely will move on to another line of work once she decides what she wants to do next with her life.  Liz transcends the stereotypical "hooker with a heart of gold" in that she retains her tough exterior, but still demonstrates evidence of being a decent human being.  The only scene where Kate and Liz meet is in the elevator after Kate has been viciously attacked and is bleeding to death, and when Liz is about to board.  Kate silently reaches out to Liz, begging her to help.  Liz, in shock and horror, reaches out to Kate to try and help her until she notices the killer standing nearby, whereupon she snatches the razor from the ground after the killer has dropped it.  Liz was helpless to do anything to save Kate, but her innate decency allows her to have the courage to reach out to another human being in danger.  This is in contrast to Liz's cowardly middle-aged client from out of town, who ran off in horror the moment he saw the bleeding and wounded Kate.  (Ironically, Liz's attempt to help Kate causes her life to be endangered, as her continued presence at the elevator allows the killer to become aware of her.)  Despite the seedy underbelly of society that Liz has seen in her line of work, she's still a good person.

In some respects, when Kate desperately reaches out to Liz in the elevator, she is metaphorically handing over the care and responsibility of her teenage son Peter to Liz.  From the moment of his mother's death, Peter rises to the occasion by mounting an effective and unconventional investigation to bring the perpetrator to justice.  He proves to be a young man of strength and character that his mother would be proud of.  Peter might be presented in the movie as a nerdy computer-whiz, but Keith Gordon portrays him with sympathy and respect.  There's nothing weird, socially inept or off-putting about his character.  When Peter saves Liz from the killer on the subway, he finds an unlikely ally and surrogate mother/sister in the streetwise hooker.  The Peter/Liz scenes are some of the best moments in "Dressed to Kill."  As he did with Angie Dickinson, Keith Gordon has a wonderful rapport with Nancy Allen that you can believe that these beautiful women are delighted to spend time with him.  In turn, Nancy Allen shows a different side to Liz's personality with her friendship and concern for Peter.  Liz still has a tough edge, but demonstrates a responsible, maternal side that suggests she would make a good mother someday.  The scene where Liz tries to comfort Peter when he expresses how much he misses his mother Kate is quite touching.  You root for Peter and Liz to successfully unmask the killer and survive "Dressed to Kill."

In contrast to the Vera Miles/John Gavin characters in "Psycho," Liz and Peter actually have depth and personality.  Miles and Gavin did fine work in "Psycho," but it's clear in that earlier film that Hitchcock had no interest in who Lila Crane and Sam Loomis were as individuals.  Lila and Sam were there to move the plot along, whereas Liz and Peter look like people whose lives, and friendship, will continue long after "Dressed to Kill" ends.  Because his main protagonists are not mere plot devices, "Dressed to Kill" is perhaps Brian De Palma's masterpiece.  For once, he actually seems interested in his protagonists and cares about what happens to them.  He allows them moments of humor, warmth, and sympathy that help to make them engaging characters.  As a result, Kate's death scene never has the cold, clinical quality that is evident in the brilliantly staged, but impersonal, scenes of violence from other De Palma movies.  It's an emotionally shattering experience after everything the audience has shared with Kate.  And, as mentioned before, you enjoy spending time with Liz and Peter so that the finale, with Liz imperiled with the killer nearby, is incredibly suspenseful.  Kate, Liz, and Peter are all vibrant, interesting people who would be fascinating to watch in other kinds of stories, not just the horror-suspense narrative that De Palma has devised for this film.
Copyright and Posted by Hill Place at 6:58 PM