Charlie Chan and the Case of the Monogram Pictures Mysteries 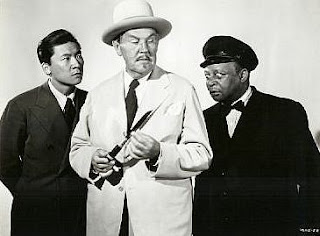 Being of Asian ethnicity, I was highly aware of the Charlie Chan mystery movies of the 1930s and 1940s more by reputation than by actual viewing while I was growing up.  They simply weren't airing them as often on television in the 1970s and 1980s when I was a kid, probably due to concerns over political correctness.  I have seen many documentaries about the depictions of Asians in Hollywood, and the Chan series is often derided as ranking among the nadir of portrayals of Asians in cinema.  Thanks to YouTube, I've had an opportunity to catch up with these movies and make my own assessment of them.

The reason why the Chan films remain a troublesome issue is the fact that he was, after all, portrayed by Caucasian actors (first Warner Oland, then Sidney Toler, and then Roland Winters) who all played the role in a stereotypically stilted speaking style.  I have found that I am personally not offended by the series because I recognize that it had good intentions--it meant to portray an Asian character who was smart, respected by the community and by the world at-large not just by Caucasians but by all other ethnic groups as well, and who always brought the story to a resolution.  He was never a passive or subservient character standing by the sidelines.  It's just too bad that he wasn't played by an actual Asian actor--even though I hate political correctness, I acknowledge that this is a major caveat that has caused the series to remain controversial to this day. 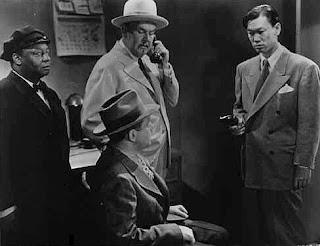 But I find that what redeems them is the fact that all the other Asian roles in the series are in-fact played by Asian actors.  In the Chan films I've seen so far, the other Asian actors play their roles with intelligence and, in the cases of the portrayals of Chan's many sons (played variously by Keye Luke, Victor Sen Yung or Benson Fong), they are allowed to have different facets of personalities on display.  They weren't just one-dimensionally stoic, they could be humorous, heroic, and romantic.  Even though the Chinese aspects of these characters are often highlighted and accentuated by the screenwriters, I think it's still preferable to the current politically correct portrayal of Asians in cinema and television, which tends to cast Asian actors into thankless roles as doctors or lawyers who make no significant contribution to the plot but are meant to fill some sort of casting quota.  Or even worse, casting Asian actors in roles with American or European-sounding last names, as if their Asian heritage was totally superfluous or expendable.  The Charlie Chan series remain fascinating because the racial aspects of these films contain both troubling as well as positive nuances.  On the one hand, they perpetuate the stereotype of the saintly wise, Confucius-quoting Chinese male who speaks in metaphors in an unnaturally stilted manner.  On the other hand, the series often refutes the conspiracy-laden "Yellow Peril" cultural stereotypes that regarded Asians with contempt, distrust and suspicion. 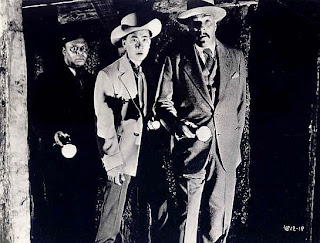 One entry of the series, "The Trap" (1947) even calls attention to this cultural distrust of Asians when one of the characters, the hysterically pathetic blonde showgirl Clementine (Rita Quigley), accuses her female Asian colleague San Toy (Barbara Jean Wong) of murder simply because one of the victims had been strangled by a silk bathrobe cord, which the script alleges is a murder technique favored by the Chinese.  San Toy never wilts under the pressure of these false accusations:  She calmly and admirably confronts her accusers and is the one who calls in Charlie Chan to solve the mystery.  In particular with "The Trap," a film presumably written, produced, and directed by Caucasians, it is the Caucasian characters who are unflatteringly portrayed as emotional, hysterical, devious, manipulative, unintelligent, and vengeful.  It highlights how Asians and other ethnicities are arguably not treated any worse, or any differently, in the Chan series than the Caucasians. 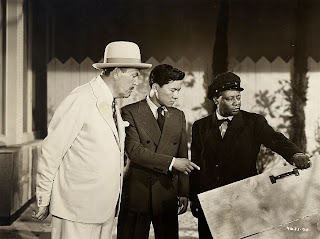 "The Trap" was one of the later Chan mysteries made at the Poverty Row grade-B studio, Monogram Pictures, after the original studio 20th Century-Fox ended their series of Chan films in 1942 (purportedly due to concerns of American audiences not being interested in watching an Asian hero on-screen after the Japanese attack on Pearl Harbor).  I actually prefer the Monogram Chan Films because of the addition of the gifted comedic African American actor Mantan Moreland as Chan's right-hand man/chauffeur Birmingham Brown to the ensemble.  Moreland himself is a controversial figure in cinema history, as some people have accused his style of comedy and on-screen image as being racist and unflattering towards African Americans.  While I acknowledge and can respect such concerns, I admit that I am a great fan of Mantan Moreland and I have personally found that his characters are often self-aware, street-smart, and sympathetic despite their apparent lack of sophistication or refinement.  In the storylines, I feel that the Chans regard Birmingham not as a servant, but as a valued member of their team.  I enjoy watching the genuine friendship and easy chemistry & camaraderie between Moreland's Birmingham Brown, Chan's various sons, and Chan himself.  They are great together.

Monogram acknowledged Moreland's contribution to their films by often giving him equal billing in the credits and advertisements as the Caucasian actors.  In the Chan films, Moreland almost always received second- or third-place billing in the credits and he remained a mainstay of the series even after Sidney Toler died and was replaced by Roland Winters.  Even though the Chan films are not perfect by any stretch of the imagination, they are still notable when you consider how rare it is to find films in classic Hollywood cinema where characters of different ethnicities (including Asians, African Americans and Caucasians) are all sharing screen-time playing significant roles, and working together in a spirit of friendship and cooperation, to accomplish a common purpose.
Copyright and Posted by Hill Place at 11:19 AM