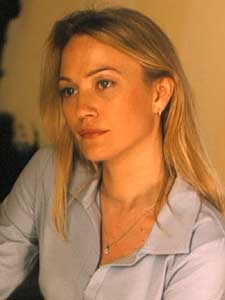 Today marks the 10th anniversary of the introduction of one of my favorite TV characters of all time, the imperiled heroine Kate Warner (played by Australian actress Sarah Wynter) in Season 2 of "24."  She was originally conceived as a potential love interest for the series' protagonist Jack Bauer (Kiefer Sutherland), and debuted on the premiere episode of the second season, which aired October 29, 2002.  Throughout that season, Kate was the "true blue" good girl who often rose to the occasion and aided Jack in accomplishing his mission.  At the time, I was very intrigued with the character because I felt she quietly, and effectively, reflected the naivete, strength, and resolve of the American public, both before and after September 11th, an accomplishment that far surpassed her original conception as a mere romantic foil. 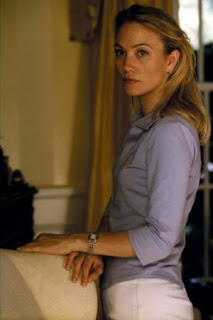 Kate Warner was introduced during the second season of “24” as the show’s new leading lady after her predecessor—Jack’s wife, Teri Bauer (Leslie Hope)—was murdered in the finale of the previous season.  She was the attractive daughter of millionaire industrialist Bob Warner (John Terry) who, as the season opened, was helping her younger sister, Marie (Laura Harris), prepare for her wedding.  Unlike the introduction of other new characters in subsequent seasons of "24," that I sometimes felt were shoved down our throats, the producers in Season 2 wisely eased Kate into the fabric of the series by having her do only two or three scenes in each of her first few episodes until she was firmly established into the plot. 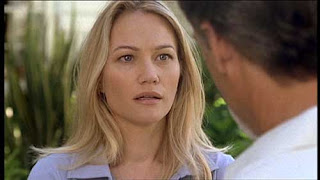 During Season 2, Kate suspects her sister Marie’s fiancée Reza of being involved with terrorists; learns that her father really works for the CIA; inadvertently gets her father arrested on suspicion of treason; is kidnapped by terrorists and tortured for information; is rescued by Jack Bauer and accompanies him on his day-long quest to prevent the detonation of a nuclear bomb in Los Angeles; enters a Mosque disguised as a worshipper, and without backup, to ID a suspect; helps Jack interrogate another suspect in Arabic; learns her own sister Marie (and not Reza) is actually the one who is in cahoots with the terrorists and almost gets killed by her; is asked to help retrieve evidence to prevent a war; gets locked in a car trunk after being traded by Jack with one of the villains in order to secure vital information; is almost killed by thugs while retrieving a computer chip with vital data; takes a quick bubble bath; and rescues Jack’s hapless daughter Kim Bauer from another dire situation in time for the penultimate scene where she reunites this estranged father and daughter for the Season’s finale (which takes place moments after witnessing another father-daughter relationship—her own father and sister—split apart forever). 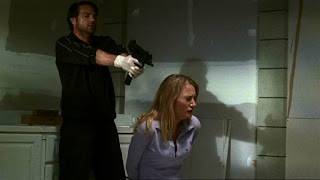 Sarah Wynter made Kate’s reactions, as the show’s resident civilian, to the events swirling about her believable and compelling, and became one of TV’s most underrated heroines.  I didn't see her as a mere plot device--I was always curious what would happen next to her character and was enthralled at the arc that the writers had created for her.  I disagreed with TV Guide’s Matt Roush when he stated that Kate is a “thankless” character that the show would be better off without.  In his hilarious Washington Post article, “Run, Kim, Run!,” Hank Steuver sarcastically quipped that the hapless teenage Kim Bauer “was us” because “Without meaning to, she has come to represent the vapidity and naive innocence of a Britney Nation caught up in something deadly serious, with only her wits and the occasional visibility of her nipples to save her."  From a less cynical perspective, it was really Kate, and not Kim, who better symbolizes civilian America in the face of adversity.  The early episodes of Season 2 depicted Kate as an intelligent, well-educated young woman so consumed by her own family’s personal problems that she fails to recognize the larger global implications of the events swirling on about her.  After she has been kidnapped and tortured for information, instead of shriveling in fear, Kate summoned up reservoirs of strength and courage in an effort to face danger and evil head on.  She could be forgiven at times for being wimpy (she was not a federal agent or law enforcement officer, after all) because her resolve never wavered even when it was clear she was not a stereotypical action heroine. 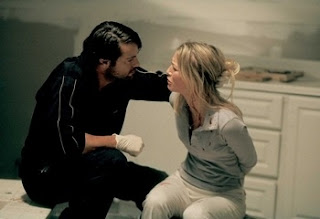 By the end of the day, Kate experienced so much horror and violence that she came to the difficult, but inevitable, conclusion that the evils of the world cannot be easily rationalized.  At first disbelieving that her sister willingly aided the terrorists, Kate comes around by the time of the season finale when she returns to CTU in time to moderate a confrontation between her father and the apprehended Marie.  Separated behind a wall of glass, Marie Warner refuses to answer her father’s desperate pleas (“There MUST be a reason”) to explain her acts of treason.  Kate says simply, “There is no reason, Dad…Trust me…She’s not going to give you any answers.  She can’t.  At least nothing that we could ever understand.”  According to Salon.com’s Charles Taylor, “Kate speaks the truth (her father’s) good, rational liberalism cannot countenance…the pain of that scene is not that Marie has accepted madness, but that (Kate), having been through hell herself, having escaped torture and then death at the hands of her sister, is now in a position to understand the presence of the irrational at work.” 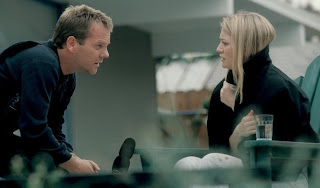 After Kate was written out of the series, Jack Bauer was paired with romantic interests who were either connected to the DoD (Kim Raver's Audrey Raines) or was a Federal Agent (Annie Wersching's Renee Walker).  Kate’s absence left the show without a civilian outsider, who is not connected with the President’s inner circle or the Government, for the audience to identify with.  Kate remains, in the eyes of the series fans, one of the more controversial characters.  She was either loved or despised.  There was no middle ground on this issue.  Kate is as despised by some "24" fans as Tanya Roberts's Stacey Sutton in "A View to a Kill (1985) is despised by Bond movie fans.  Some fans were irritated by the character's inexperience and naivete because she was not a trained Federal agent with field experience.  Others felt Sarah Wynter's performance was stilted and complained bitterly about her facial expressions, which included a pensive frown and furrowed brow that I acknowledge was unflattering at times.  On the other hand, people like me enjoyed the subdued humanity that Wynter brought to the character.  Even if her facial expressions seemed unattractive at times, it just made her seem REAL.  It demonstrated to me that the otherwise beautiful and attractive Wynter was more concerned about bringing authenticity to her work as Kate than about her appearance.  Kate's lack of romantic chemistry with Jack was made up by the fact that Sutherland and Wynter had a genuine brother-sister rapport on-screen.  I liked the friendship that developed between their characters that season.  At the very least, I think Kate deserved better than being short shrifted in her send-off with simply a brief telephone scene in Season 3’s premiere episode.  Since then, Sarah Wynter followed-up her promising work on “24” by focusing more on her family life after she married Details magazine editor Dan Peres and had three sons.  I thought Wynter was a real up and comer when I became acquainted with her work 10 years ago, and I still hope she will have further opportunities to show what she's capable of. 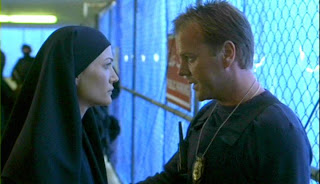 A couple of years ago, when “24” was filming its 7th season in Washington, DC, I ran into the production crew of the series filming scenes near the Navy Memorial.  I recognized Executive Producer/Director Jon Cassar on the street between takes.  During an appropriate moment, I approached Mr. Cassar and said “There’s a question I’ve been wanting to ask you for almost 5 years now.  Why won’t you bring back Kate Warner, not even for just one episode?”  Mr. Cassar seemed incredulous and said “You LIKED Kate Warner?!”  I assured him that many fans of the show, especially people in Washington, DC, liked the character.  I guess my inquiry intrigued him, as he asked me to walk with him as he was directing the crew to set up the next shot.  We debated the whole Kate Warner issue for maybe about 10 or 15 minutes.  He said that the show’s producers concluded that Sarah Wynter simply didn’t have great romantic chemistry with Kiefer Sutherland, which contributed to her character’s departure.  I argued that the character should have been brought back, not as his girlfriend, but as a loyal and supportive friend who believed in him and was willing to help him at all costs.  He at least acknowledged that aspect of the character.  At the end of our conversation he said, “OK, dude, I never thought of her as anything more than his girlfriend, but for you I’ll do it.  I’ll bring her back.” 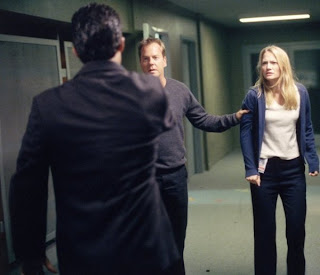 Cassar left the series after that season, so Kate never had a chance to return to the series before it was finally cancelled.  (It's also possible that Cassar was insincere when he said he'd bring Kate back, just to appease me.)  Perhaps it’s just as well Kate never returned.  “24” had a bad history of regarding its characters as mere plot devices whose motivations and personalities could be changed on the whims of its lazy writers in a cheap effort to shock its audience.  And at least Kate didn't get killed or have her life ruined by being involved with Jack Bauer, like his other leading ladies were.  I would have hated to see Kate come back under those circumstances.  Kate had a character and story arc that remained consistent.  I like to think of Kate Warner as one of the few characters on “24” who was never compromised or ruined by its writers and producers.
Copyright and Posted by Hill Place at 12:28 PM