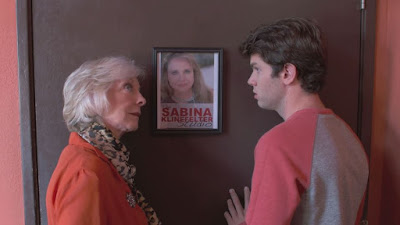 Last week, a good friend suggested I watch them in an episode of a web series they worked on called "Break a Hip."  The series focuses on the burgeoning friendship between a young, aspiring actor struggling to survive in Hollywood named Wincy (Britt Hennemuth), and the reclusive English actress Elizabeth Bumstead "Biz" Brantley (Christina Pickles) who hires him to help with errands and chores around her tiny apartment.  Over the course of each episode, which run no more than 10 minutes apiece (but which resonate with more depth, nuance, and humor than most TV sitcoms three times its length), Wincy and Biz grow close to one another as they help fill the void that exists in each others lives.  What makes the show work is how writer/director Cameron Watson (who based the premise and characters on his relationship with an actress who he helped run errands for when he first arrived in Hollywood) allows the situations to be as quirky and outrageous as they need to be without completely overdoing it.  By not making fun of these characters, and by being consistently compassionate about them, he brings enough genuineness to the proceedings that allows the audience to be easily pulled in to the story.  I was surprised at how taken I was with the series, particularly it's sixth episode entitled "The Class."  I've been quoting its endlessly memorable lines to friends and colleagues ever since seeing it. 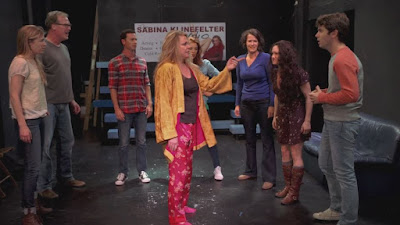 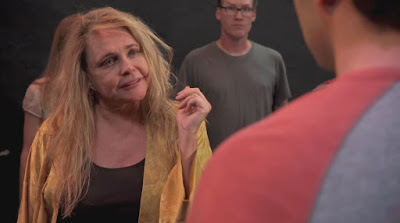 In "The Class," Biz insists on attending Wincy's acting class to see who he is training with.  She is horrified to discover that the class is taught by crazy, eccentric Sabina Klinefelter (Priscilla Barnes), who is teaching her students acting techniques that would make even the Lee Strasberg cult from the Actors Studio roll their eyes.  After witnessing Sabina's bizarre theories on acting, Biz confronts her and the two veteran actresses have it out with one another regarding their individual approaches to the craft.  What I liked about the episode, besides the fact that it was incredibly honest and funny in its parody of the LA acting scene, was the fact that Watson plays fair with both Biz's and Sabina's perspectives and doesn't show favoritism with either.  He allows both characters to represent the different kinds of actors, and acting styles, that make up the entertainment industry and lets them both have their say.  Even though Biz is outraged at Sabina's teaching style, Sabina never comes across as a one-dimensional antagonist worthy of contempt.  In her skillful hands, the underrated and fearless Barnes (who is also genuinely funny in her supporting role on the CW's critically acclaimed series "Jane the Virgin") allows the audience to recognize how Sabina is sincere about her teaching methods and that she genuinely believes her students have talent.  The scenes depicting Sabina's acting class are indeed outrageous, but Barnes plays the scenes with a level of conviction and sincerity that allows the character to come across sympathetically.  She is particularly terrific when Sabina is incensed at how Biz has criticized her students and her teaching methods.  Barnes ensures that Sabina's not a contemptible charlatan out to scam her students. 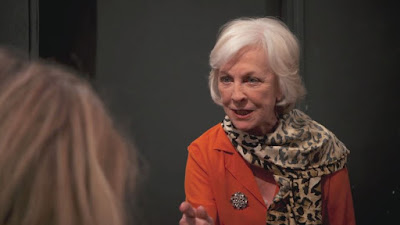 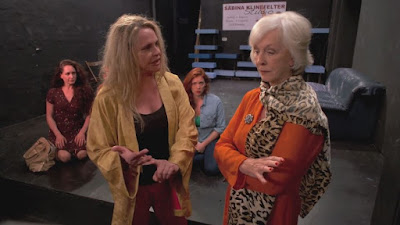 At the same time, Watson also shows respect to Biz's more traditional approach to acting and allows her an opportunity to underscore the basic components of what makes a good actor when she tells Sabina, "These beautiful young people want to learn how to act, and you are screwing around with them!...You should be teaching them how to listen, how to speak to one another, how to feel a real, true feeling, to tell the truth!  Not rolling around on the floor like a dying otter!"  Watson avoids making Biz a sanctimonious character by reminding the audience, through Wincy's embarrassed reaction, that Biz is actually out of line by insulting both Sabina and her students with her unsolicited comments.  We might personally agree with Biz when she admonishes Sabina to return to the basics of acting, but the way she goes about it is undiplomatic.  Even though she's one of the lead characters, Watson doesn't completely excuse Biz for her blunt rudeness, even if what she's saying is true, by allowing a supporting character like Sabina her own perspective.  Because Watson remains objective about his central character, doesn't try to make Biz always right about everything, and paints her as a multi-dimensional, flawed individual with both weaknesses and strengths, we find that we ultimately admire her forthright honesty and ability to get to the heart of the matter, despite the occasionally misanthropic way she goes about it. 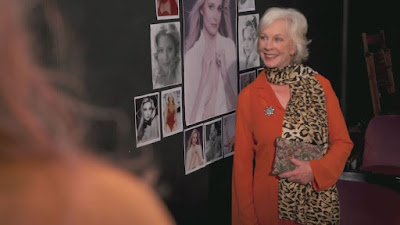 What ultimately makes "Break a Hip" work as a series is the skillful lead performance by Christina Pickles.  Particularly in "The Class" episode, Pickles underscores the delicate radiance and stubborn persistence that underscores her character's ability to survive the ups and downs of being a working actress in Hollywood.  I particularly enjoyed the moment when Wincy introduces Biz to Sabina and the class by calling her "a wonderful actress."  Pickles effectively conveys Biz's sincere and glowing vulnerability when she thanks Wincy for showering her with praise.  You get the feeling that it's been a long time since anyone has given Biz the respect that she deserves and Pickles sells that moment without sentimentality that would have made the character come off as self-indulgent.  When she tells the class that she studied at the Royal Academy of Dramatic Art, and that she worked with Gielgud, Olivier and Richardson on the West End of London, and that she guest-starred on "Rockford Files" and "Big Valley" in her youth, it could have been an overly self-aggrandizing moment, but Pickles's sincerity makes it come across more like an effort on her part to establish herself as a peer with the students in the class.  I don't believe Biz is trying to impress the students so much as trying to say to them "I know what you're going through, I've been there as well.  Let's share our experiences so we can help one another." 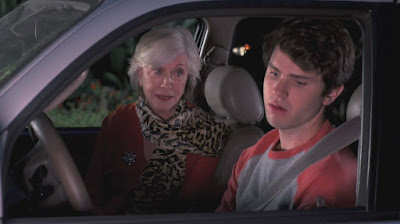 Even though "Break a Hip" is a comedy, and a very funny one at that, I haven't emphasized or quoted the witty lines and quirky moments that comprise much of the series because I don't want to ruin it for people who haven't seen it yet.  You have to see it for yourself to appreciate the humor and satire that distinguishes this from other shows, both on TV and the internet.  In some ways, because it addresses the plight of mature actresses in Hollywood, "Break a Hip" could be considered a companion piece to HBO's brilliant "The Comeback" starring Lisa Kudrow.  I think what makes "Break a Hip" so special is that it allows mature actresses like Christina Pickles, Allison Janney and Priscilla Barnes an opportunity to play meaty showcase roles that stands in contrast to our overly youth-obsessed media and industry.  I also like how the show dramatizes the friendship and interaction that can exist between mature and young characters, which you rarely get to see in other programs.  But even with its young characters, "Break a Hip" defies convention.  Wincy is indeed a character still in his 20s, but Hennemuth's warm performance thankfully ensures that he never comes across as hip or trendy--and nor do the other young characters on "Break a Hip."  The young people on this series all come across as nice, well-meaning, off-beat individuals who are refreshingly without irony or snark.  They are the kinds of people I can relate to more than the people who populate most TV shows these days.  Because of its unusual perspective, and its highlighting of mature, talented actresses who don't always get the attention they deserve, "Break a Hip" is a web series worth seeking out.  I look forward to its Second Season and hope these characters get expanded to a weekly series or feature film in the near future.
Copyright and Posted by Hill Place at 5:29 PM