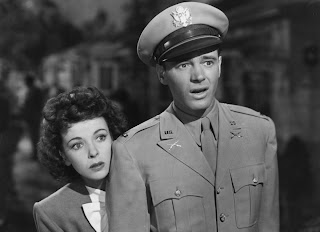 Growing up a big movie/TV buff, there was one actor who was always a favorite of mine, but I am ashamed to admit that I did not rhapsodize about him the way I would others.  In a sense, I sort of took him for granted, even though he was one of our finest and most underrated actors ever, but I always sincerely enjoyed his work.  I recently rediscovered William Prince while watching him in the underrated screwball comedy "Pillow to Post" (1945) starring Ida Lupino and Sydney Greenstreet.  Lupino plays a flaky heiress who takes on a sales job with her father's oil rig company in an effort to help contribute to the war effort after her father's regular salesman has left for the frontlines.  She finds, while traveling from town-to-town that the only way she can get a room for the night at local motels is if she pretends to be a military spouse.  She persuades hapless Army Lieutenant Prince to help sign in with her at the motor court where she has been promised a room, but complications ensue when Prince's commanding officer (Greenstreet) happens to live in the same motor court.  In an effort to avoid being court-martialed, Prince and Lupino must continue the ruse of being married as their little white lie spirals out of control. 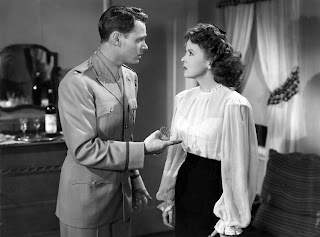 Prince made this film during his brief tenure under contract at Warner Brothers during the 1940s after Warners discovered him while he was appearing in The Eve of St. Mark on Broadway.  He had already appeared in several Broadway plays by that point, including productions of "Hamlet," "King Henry IV, Part I," and "Ah, Wilderness!"  Many of Prince's roles at Warner Brothers cast him in roles that reflected how the country was currently at war.  He officially debuted on-screen in the featured role of Pills, the athiest ship's pharmacist who unexpectedly finds religious faith, in the classic submarine drama "Destination Tokyo" (1943) starring Cary Grant.  He next appeared as Andrea King's sailor husband, who discovers while on leave from the Navy that his wife did not remain faithful to him, in Warners's touching homefront drama "The Very Thought of You" (1944).  Prince cameo'd as himself volunteering at the "Hollywood Canteen" (1944)--he appears very briefly in the Andrews Sisters musical number "Gettin' Corns for My Country," wearing an apron and carrying a tray filled with milk bottles while serving GI Dane Clark.  Prince was the ill-fated high school history teacher from Schenectady, Lt. Sid Jacobs, tortured to death by Japanese soldiers, in Raoul Walsh's "Objective, Burma!" (1945) starring Errol Flynn.  Prince's face is off-screen when Flynn finds his dying character, but his voice effectively conveyed Lt. Jacob's anguish and pain that the scene has always been sad and touching. 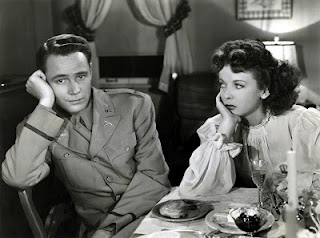 After playing mostly serious roles, it was refreshing to see Prince display his comedic chops in "Pillow to Post."  He is absolutely hilarious as the hapless Army Lieutenant whose military career is threatened by Lupino's scatterbrained heiress.  Unlike many of his other Warner Brothers films, Prince actually gets to be the leading man in this film, winning the girl at the end, and doesn't have to play second-fiddle to Cary Grant or Errol Flynn.  He and the surprisingly hilarious Ida Lupino have great chemistry together.  I particularly like the humorous way Prince gets embarrassed and awkward while watching Lupino adjust her stockings getting dressed in the morning.  Prince's wide-eyed and nervous reactions to the events un-spooling around him adds to the hilarity of the film.  He isn't just playing the stuffy straight-man in this underrated comedy.  It would have been nice to have seen them paired together in more comedies at Warner Brothers.  For those who are now curious about the movie, you can watch it on YouTube here. 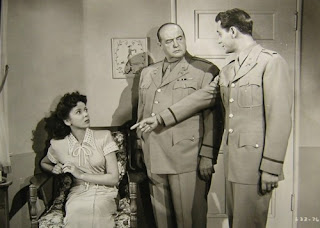 Alas, it wasn't to be.  Prince's Hollywood movie career never quite took off, and he returned to Broadway within four years to star in the hit "John Loves Mary" with Nina Foch.  The remainder of his 1940s film output included the Busby Berkeley comedy "Cindarella Jones" (1946) with Joan Leslie; the film noirs "Shadow of a Woman" (1946) and "Dead Reckoning" (1947); Edgar G. Ulmer's off-beat musical drama "Carnegie Hall" (1947), where he had another rare leading role playing a musician torn between his mother's desire to be a classical music pianist, and a jazz musician; reunited with Lupino (though not playing her leading man) in the western "Lust for Gold" (1949); and playing the bland Christian opposite Jose Ferrer's Oscar-winning performance in "Cyrano De Bergerac" (1950).  Prince's role in "Cyrano" is generally considered his best screen role, but I still prefer him in "Pillow to Post," where his character is less inherently colorless and he has more to do.

Prince spent most of the 1950s and 1960s based in New York, and enjoyed a very prestigious and successful career appearing on Broadway, live TV anthology dramas, and daytime soaps.  His rare movie role during this time was the lead in William Castle's suspense thriller "Macabre" (1958).  Some of Prince's most notable Broadway productions during this time included "As You Like It" with Katharine Hepburn, originating the role of Christopher Isherwood in "I Am a Camera," "Mary, Mary," "The Ballad of the Sad Cafe," and "The Little Foxes" opposite Anne Bancroft.  Later on, however, he enjoyed a career renaissance when his movie and TV appearances picked up steam in the 1970s thanks to roles in "The Stepford Wives" (1975), Alfred Hitchcock's final film "Family Plot" (1976), Sidney Lumet's "Network" (1976), "The Gauntlet" (1977) with Clint Eastwood, and many others.  He also distinguished countless TV movies and miniseries including "Sybil" (1976), "Captains and the Kings" (1976), "Gideon's Trumpet" (1980), and "War and Remembrance" (1988) playing Admiral Chester Nimitz.

William Prince was an excellent character actor who helped enhance everything he was ever in.  He always had decent parts but, as a fan of his work, I wish he was given more showy roles on the big or small screen where he could truly distinguish himself.  It was likely that it was on the Broadway stage that he was given the opportunities to demonstrate what he was capable of.  To this day, he is still a bit of a mystery figure in the history of TV and movies.  Prince rarely gave interviews, so one has no clue what his real-life persona was truly like, or what he thought of his career.  In addition, Prince's name is rarely mentioned in interviews conducted with his colleagues, adding to the mystery of who he was.  Internet searches of his name inevitably turn up references to Prince William of England, and not to "William Prince" the actor.  I wrote him a fan letter when I was still in High School in the late 1980s.  I received in the mail a few weeks later a short note and a picture, which was not autographed.  I think, because Mr. Prince was such a busy character actor at the time, he may have forgotten to sign the photo before he mailed it.  Because his response to my letter was so short, that made him even more mysterious to me.

Nevertheless, even though very little has been written about him, Prince always remained an interesting, accessible actor which is why I believe he is worthy of rediscovery.  He never came across as an affected "thee-uh-tah" actor.  Because he worked so much in films and TV in his later years, more than making up for his abbreviated tenure as a leading man at Warner Brothers in the 1940s, I choose to believe that Prince was not a typical Broadway stage elitist who looked down his nose at his brief opportunity as a Hollywood leading man.  I'd like to believe he enjoyed his Warners tenure and that he was content with his impressive accomplishments as an actor.  He certainly had a career that most aspiring actors would envy. 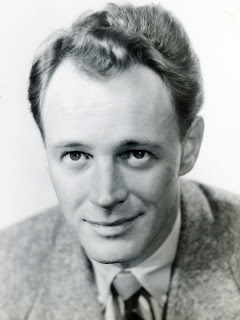 Copyright and Posted by Hill Place at 11:00 AM